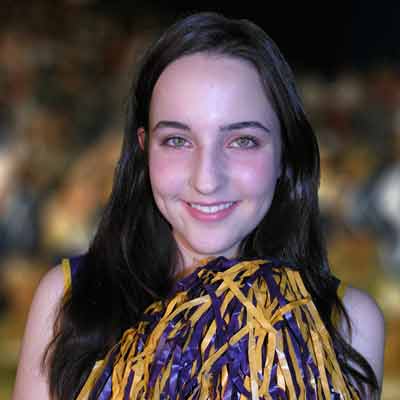 Members of the Yoknapatawpha High School cheer squad had found their team captain lifeless on the path she was taking to meet them.

Back at headquarters, Detectives Armstrong and Murphy sat down with the young woman who found Katy's body to find out what happened.

Then they talked to the cheerleading coach who called 911.

A little later, the detectives spoke with Katy's grandmother about their visit the morning Katy died.

Late that afternoon, CSU provided a preliminary inventory of the evidence they collected at the scene while the Oxford Weekly Planet reported Katy's death to the community.

The next morning, the detectives met with Katy's family. First, they talked to Katy's mother.

Then they spoke with Katy's stepfather, and finally, they had a conversation with Katy's younger brother.

After the Brown family left, Detectives Armstrong and Murphy reviewed the recent calls on Katy's cell phone as well as a video found on the phone.

Later that afternoon, they talked to a former cheerleader about why she left the squad.

The following day, the detectives met with Katy's supervisor from her job at the library.

Later, Katy's boyfriend came in to talk with Detectives Armstrong and Murphy.

A little while later, the only guy on the cheer squad met with the detectives.

Late that afternoon, the assistant principal sat down with the detectives to talk about Katy's school life.

The next morning, the detectives talked to a girl who reportedly resented Katy after changes in the YHS athletic programs.

A little later, a deputy notified Detectives Armstrong and Murphy that an informant had come in to talk to them.

After lunch, the detectives reviewed an early report from the crime lab.

Then a friend of Katy's boyfriend came to the sheriff's department to meet with the detectives.

To wrap up the afternoon, Detectives Armstrong and Murphy asked two witnesses to come back in so they could clear up conflicting information related to each of them.

The detectives asked Cody to come back in so they could ask him about what they've heard from other witnesses.

After Cody left, a patrol officer notified the detectives that he'd brought in someone they might want to talk to.

After lunch, the detectives sat down with Katy's stepfather again to follow up on a few things.

When school let out, Detectives Armstrong and Murphy had another conversation with Paula about her relationship with Katy.

Later, they had Katy's supervisor come in again so they could follow up on some new information.

When the detectives finished that interview, the coroner's preliminary report was waiting for them.

The next morning, Detectives Armstrong and Murphy met with Coach Puskus again to follow up on what they've learned since they last spoke to her.

Then they sat down with the assistant principal to see if there was anything he wanted to add to what he previously told them.

At lunchtime, they had another brief conversation with Sherry before they went to see a judge to get search warrants.

The first warrant they executed was for the Guyton residence.

The next day, they searched both the Adams and Brown residences for evidence related to Katy's death.

The following day, they spent hours searching the high school for evidence that could be connected to Katy's death.

Investigators reviewed a notebook labeled "Private" found in Katy's locker to see if it contained any information that could help the investigation.

While they waited for the crime lab to process the evidence they collected, the detectives brought in Wanda and Tim for follow-up conversations to get answers to some open questions.

After lunch, they met with Katy's mom again to try to get some more information.

When the forensic analysis came in, Detectives Armstrong and Murphy knew who they needed to talk to.

After speaking with the suspect, the YCSD announced an arrest.