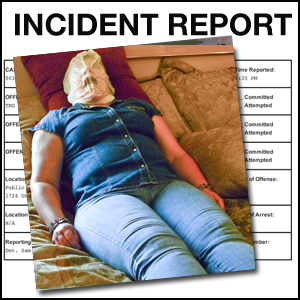 Friday night, a man called 911 after he and his stepdaughter found his wife dead in their home. Initial indications at the scene suggested a possible suicide.

After the detectives examined the master bedroom where the body was, they sat down with George O'Connor to find out more about how he came to find his wife's body.

While investigators worked to learn more about the late Veronica Smith, the Oxford Weekly Planet broke the news to the community.

Detectives Armstrong and Murphy talked with Veronica's daughter, Haley, about her life with her mom and the events of the last 24 hours.

Later on, Veronica's sister, Liz, drove up to meet with the detectives.

CSU sent over a preliminary list of evidence collected from the scene along with some photos.

That afternoon, investigators wrapped up their canvass of nearby residents of the Smith/O'Connor neighborhood.

Following up on what they heard from Veronica's husband and sister, investigators spoke to people who'd spent time with them the night Veronica died.

The next day, the detectives went to the Yoknapatawpha Gastroenterology Center to talk to Veronica's co-workers. First, they sat down with Dr. Hilton Burns, one of the partners.

Next, they met with the other partner, Dr. James Mendoza.

After speaking with the partners, the detectives talked to the other employees at Veronica's practice.

Meanwhile, investigators talked to Veronica's friends to find out more about where Veronica was the evening she died and what her mood was like.

The next morning, the detectives met with Veronica's brother-in-law and former boyfriend, Dr. Michael O'Connor.

Before their next interview, Detectives Armstrong and Murphy reviewed Veronica's cell phone records and a map of locations relevant to the investigation.

A little later, Will Sands, a longtime friend of the department, came in to tell the detectives about his interactions with Veronica the evening she died.

Meanwhile, investigators followed up on the conversations with Veronica's partners to verify where Dr. Burns and Dr. Mendoza were the night Veronica died.

Investigators also looked into where Dr. O'Connor was the night his sister-in-law died.

Detectives Armstrong and Murphy met with Veronica's attorney to find out more about the malpractice lawsuit.

That afternoon, they went over to the hospital to talk to people there who'd worked with Veronica, and they met a doctor who seemed to have some inside knowledge.