YCSD mum on connection to murder 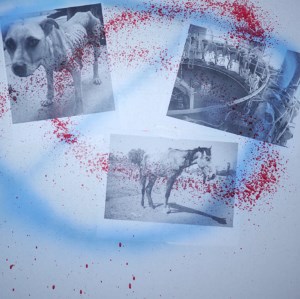 As if to add insult to injury, on the same night Barbara Dubois was killed at the Yoknapatawpha County Convention Center, someone maliciously damaged rooms associated with the pageant.

The vandals spray-painted the Yoknapatawpha County Literature Festival Pageant office and hung pictures of maimed animals in the stage room, both located at the YCCC.

"Nothing like this has ever happened here before," says Yvonne Boyd, Events Manager at the convention center. "It's important for people to remember, however, that the attack was aimed not at the YCCC but at the pageant itself. No guest rooms were in any way disturbed."

The pageant has been under sharp criticism from both those who would rather not see a beauty pageant aligned with the literature festival and those who fault the planners for allowing Lamar Cosmetics to sponsor the event.

Lamar Cosmetics, owned by Allie Lamar, has been accused by animal rights activists of conducting unnecessary product tests. The pictures hung in the stage room reportedly depicted this type of animal abuse.

Norm Resol, custodial engineer at the YCCC, said no paint supplies were missing from the maintenance room. "And I didn't see nuthin'," Resol added.

"No suspects in the vandalism incident are in custody at this time," said Yoknapatawpha County Sheriff's Department Public Information Officer Elizabeth Jones, "but the investigation is ongoing."

YCCC lounge bartender Bob Niwachee noticed nothing out of the ordinary last night. "The mood was festive, and the tips good. As best as I can recall, I didn't serve anybody wearing a ski mask."

Jones refused to speculate whether the vandalism is linked to the murder of Barbara Dubois, the pageant finalist whose body was discovered at the YCCC early this morning.

Lamar said that the show would go on. "We cannot allow violence to dictate our actions. We must bring the pageant to its conclusion if only to honor the memory of Barbara Dubois."