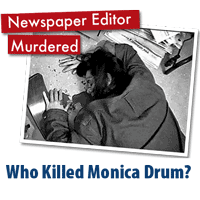 The victim was identified as the editor of the Oxford Eagle newspaper.

A little later, the detectives met the publisher back at the newspaper office to talk about Monica.

Then the detectives talked to a woman whose name they'd come across in Monica's office.

After lunchtime, Detectives Murphy and Parker met with the sports editor to find out more about his experiences working with Monica.

While the Oxford Weekly Planet was sharing the news of Monica's death with the community, CSU sent over an informal inventory of part of her office to assist the detectives with their investigation.

The next morning, Detectives Armstrong and Murphy sat down with the security guard who was on duty the night Monica was killed.

After that interview, the detectives took another look at the paper's visitor log and Monica's record of the phone calls she made.

While the detectives were reviewing Monica's recent appointments, the Oxford Weekly Planet's Crime Beat had their own news to share about the investigation.

Following a quick lunch, Detectives Murphy and Parker reviewed the personnel files of the former newspaper employees who were fired in the last six months.

A short time later, the detectives got a surprise.

The man who dropped a bombshell on the investigation agreed to talk to the detectives about his involvement in Monica's murder.

Meanwhile, investigators pulled copies of articles Monica wrote about the man and an old incident report involving the two of them.

Late that night, the Sheriff's Department got a call about an unusual object found at Monica's home. Detective Parker responded to the scene.

The next morning, the detectives met with the woman who made the discovery.

Then Detectives Murphy and Parker talked to the wife of the man who claimed responsibility for Monica's death.

That afternoon, the detectives found out what that object found in Monica's house was for.

Later, they reviewed Monica's will and some letters written to her.

At the same time, the Oxford Weekly Planet published a message to the community from a person connected to the investigation.

Just before the end of the day, the detectives received a preliminary evaluation of a person currently in the county jail.

In the morning, Detectives Murphy and Parker received a report on firearm-related evidence in the case along with background information on someone mentioned in Monica's will.

After reviewing that new information, the detectives met with a longtime friend of the man currently in custody.

That conversation led to the discovery of some evidence that changed the direction of the investigation.

While the Crime Beat told the community about the latest wrinkle in the case, Detectives Murphy and Parker got the preliminary findings on the analysis of an item found in Monica's effects.

Later, Detectives Armstrong and Murphy sat down with another person of interest to talk about something else found in Monica's effects.

The next day, the detectives reviewed the preliminary forensics on some of the evidence from the crime scene.

Then they spoke to the man Rep. Hagen said could corroborate his story.

Shortly after they got the preliminary report from the coroner's office, Detectives Murphy and Parker met with the Eagle's janitor to find out more about the night Monica was killed.

Later, they finally got to sit down with someone they'd been wanting to talk to for a while.

At the end of the day, the Oxford Weekly Planet post their coverage of Monica's memorial service in town.

Frannie Grace agreed to come back in the next morning to try a different approach to remembering details about the night Monica was killed.

At lunchtime, the detectives had another conversation with Shawn, one of the last people to see Monica alive, to see if he could tell them anything else about the night she was killed.

A little later, the Oxford Weekly Planet shared the news of a recent turn of events that has the whole county talking.

Meanwhile, the detectives were talking about an email Detective Armstrong received from his former partner.

Near the end of the workday, the crime lab sent over some additional information about trace evidence recovered at the crime scene.

The next morning, Mrs. Hagen came in to talk to the detectives about her husband's criminal activities.

Later, Detectives Murphy and Parker reviewed some information related to a possible lead they got from the newspaper's janitor.

That afternoon, Detective Armstrong got another update from his former partner.

Bright and early the next day, night shift officers alerted Detectives Armstrong and Murphy that they had someone in custody the detectives might want to talk to.

Meanwhile, Detective Parker was working getting search warrants ready for a judge's signature. She and Detective Murphy conducted the first search that afternoon.

That evening, the detectives reviewed the alibis for persons of interest in the investigation.

The next morning, Detective Armstrong supervised another search for potential evidence in Monica's murder.

Later, while Detective Armstrong was on his way back with the evidence, a local deputy spoke to a known associate of one person of interest.

The crime lab sent over their preliminary findings from the comparison of evidence collected during the searches with evidence from the crime scene.

Following their arrest of the suspect implicated by the forensic evidence and witness statements, the detectives spoke to the person in custody and his attorney.

Later that day, a former suspect talked to the Oxford Weekly Planet about the arrest.

Go backstage at the video shoots for the Drum investigation.

Shot in the Dark