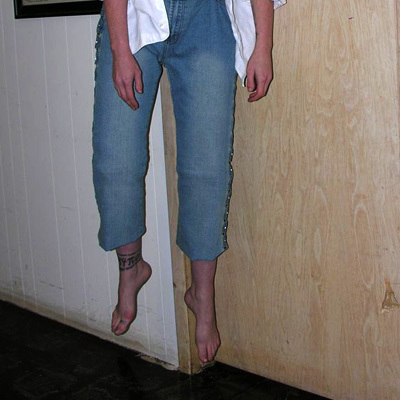 Emergency Services received a 911 call reporting a woman found hanged in her apartment.

As investigators gathered preliminary information at the scene, the Oxford Weekly Planet broke the news.

After they finished at the crime scene, Detectives Murphy and Parker went back to the station to talk to Courtney's best friend, who was one of the people who found her body.

When they wrapped up with Mee-Yon, the detectives took a look at Courtney's background and reviewed what evidence had been collected so far at the scene.

Then they sat down with the other person who was present when Courtney's body was found.

In the morning, Detectives Murphy and Parker talked to the neighbor who lived across from Courtney.

Then they had Courtney's boyfriend come in for a conversation.

Later, after investigators identified the florist who sold the roses that were delivered to Courtney, the detectives visited the shop and then spoke with one of the employees.

The next day, the person who bought the roses for Courtney agreed to come in to talk to the detectives about his connection with her.

Late that afternoon, the Crime Lab sent over some preliminary identifications of fingerprints found at the scene of Courtney's death.

The following morning, the coroner's office delivered their preliminary report on the autopsy of Courtney Morris.

Then Detectives Murphy and Parker went over the locations of interest in Yoknapatawpha County and within Courtney's apartment complex.

They also compiled a timeline of events based on witness statements and other information.

A little later, Detectives Murphy and Parker asked Mee-Yon to come in again to answer a few follow-up questions.

After school, they spoke to Phyllis's grandson about his relationship with Courtney.

The detectives asked Craig to come back in to see if he could clear up some lingering questions.

Then they went to have another talk with Phyllis.

Later that afternoon, Detectives Murphy and Parker were conducting another interview when the investigation took a turn.

Before long, the Oxford Weekly Planet told people all about it.