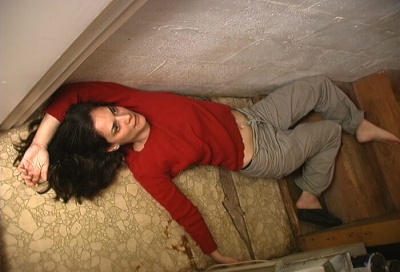 Late Sunday morning, the Yoknapatawpha County Sheriff's Department got a 911 call reporting a woman found dead in her home.

The dead woman was identified as Kimberly Pace by her sister, Becky, who was one of three people who made the heartbreaking discovery.

Kim's close friend, Cheryl Weston, was also there for the gruesome find, along with friend and neighbor, Jeremy Gladwell.

Investigators spoke with nearby residents to find out if anyone witnessed anything unusual recently, while the Oxford Weekly Planet broke the news to the community.

The next morning, the detectives spoke to Kimberly's next-door neighbor.

After lunch, her estranged boyfriend came in for a sitdown with the detectives.

Then the detectives tracked down the controversial column in the campus newspaper and Dr. Pace's rebuttal.

They also reviewed CSU's preliminary inventory of evidence collected at Dr. Pace's home and spoke to the young man seen riding his bike in her neighborhood the morning her body was found.

Later, Detectives Armstrong and Murphy went over to the university to meet with the student who reportedly wrote the inflammatory column in the campus newspaper.

The next morning, the detectives spoke with Dr. Bricker, one of Kimberly's colleagues who was not her biggest fan.

Later, Detectives Armstrong and Murphy talked to the friend Paul's been staying with about Paul's whereabouts the night Kimberly died and more.

Then they talked to Miguel's girlfriend to see if she corroborated Miguel's story.

The next morning, the detectives met with Dr. Bricker's wife to see if she could shed any light on the antipathy between her husband and Dr. Pace. Meanwhile, investigators mapped out locations relevant to the investigation.

Later, they sat down with the student who Patrick Richards claimed was behind the controversial column.

Meanwhile, investigators went over to the campus to talk to faculty and students who knew Dr. Pace.

The detectives talked to the veterinarian who examined Dr. Pace's dog after her body was found to find out if there was anything unexpected about the dog's condition.

After lunch, the coroner's office sent over a report on their preliminary findings.

Then Detectives Murphy and Armstrong got a preview of Dr. Pace's financial situation at the time of her death and what was on her computer, while analysts prepare more detailed reports.

Late that afternoon, they had a conversation with one of Dr. Pace's former students.

The next morning, the detectives met with a local physician to find out about Dr. Pace's medical condition before she died.

That afternoon, they and many others attended Kimberly Pace's funeral.

To find out more about Paul Evans's activities the night Kimberly died, the detectives talked to the C'est Belle Gallery owner and to the patron who's been supporting Paul's work. They also took some photos of Paul's creations.

Later that afternoon, they got a copy of Kimberly's last bank statement and some portions of her journal.

The next day, the detectives took another run at Carter Nichols to see if they could get a little more truth out of him.

They had a little more success prying a straight story out of Cody Matthews afterward.

Late that afternoon, new information came in from the crime lab about Kimberly's email and fingerprints in her residence.

To find out more about the death of Kimberly's dog, Emerson, the detectives talked to the dog sitter who was taking care of Emerson at the time.

Then they had another conversation with Jeremy, Kimberly's friend and neighbor, to see what he knew about Emerson's death and other open questions.

Meanwhile, other YCSD investigators started getting the results of several criminal background checks on some persons of interest.

Following up on the dog sitter's story, the detectives talked to her ex-boyfriend about the events surrounding Emerson's death.

Then they reviewed some more excerpts from Kimberly's journal that investigators had highlighted as potentially relevant.

While Detectives Armstrong and Murphy prepared for their next interview, a few more criminal background checks came in.

Later, they talked again with Kimberly's sister, Becky, to try to clear up some confusion and unanswered questions.

The next morning, the detectives followed up with Cheryl to see what she had to say about what Becky told them.

Then they met with Kimberly's neighbor again to get his side of the stories others told about him.

Later on, Kimberly's boyfriend, Paul, came in again to address some of the allegations people have made about him and about Kim.

Meanwhile, other YCSD investigators spoke to Carter Nichols' fraternity brothers about his whereabouts the night Kimberly was killed. They also looked into who Kim had been emailing.

Detective Murphy took Arthur up on his invitation to get a tour of his garden, and then she and Detective Armstrong made another attempt to get something other than attitude out of Carter Nichols.

Shortly afterward, they got the crime lab's preliminary report on trace evidence recovered at Kimberly's residence.

Meanwhile, other YCSD investigators spoke to Cody's dormmates about his whereabouts the night Kimberly was killed.

The detectives went back to Dr. Bricker to clarify his alibi for the time of Kim's death.

That afternoon, they obtained three search warrants and executed the first warrant on the university campus.

Bright and early the next morning, Detectives Armstrong and Murphy dropped in on Carter Nichols with another warrant. Later that afternoon, they went to take an official look around Arthur's place.

While they waited for the forensics, investigators compiled a timeline for the night Kimberly died and a chart of the alibis all the persons of interest gave.

The crime lab sent over preliminary reports on the evidence collected during the searches and more evidence from Kimberly Pace's residence.

When the detectives went to arrest a suspect, they were greeted with a surprise and looked for possible explanations.