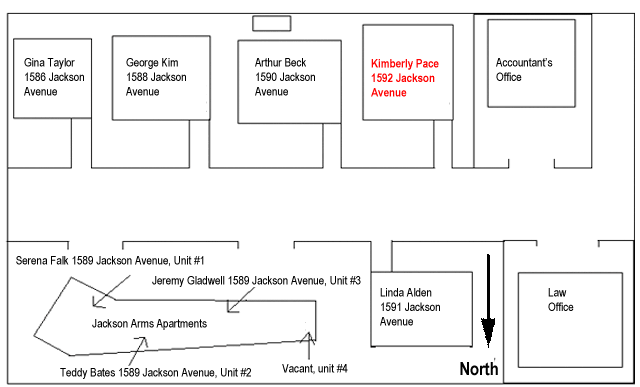 Mrs. Alden said she is a widow and lives alone. She is given to bouts of insomnia and is often awake during the early hours of the morning. She said she is also a participant in the Neighborhood Watch program set up in this area and so is accustomed to keeping an eye on things.

Mrs. Alden reported that she saw Kimberly Pace arrive home at approximately 9:35 p.m. on Saturday, October 15, 2022. She saw Dr. Pace pull her car into her driveway and go directly into her house. She reported that she did not see Dr. Pace exit her house again that evening.

Later that night, sometime around 11:00 p.m., Mrs. Alden reported that she heard a loud motorcycle engine. When she went to the window, she saw a young man she believed to be Dr. Pace's estranged boyfriend sitting in front of the Pace residence and watching the house. After several minutes, the man sped away.

Mrs. Alden said she saw Kimberly Pace's sister and two friends arrive at approximately 11:00 a.m. on Sunday morning, October 16, 2022, and let themselves into the Pace residence. Within the next 20-25 minutes, Mrs. Alden said she saw two marked police cars, an Animal Control van, and other official-looking vehicles arrive at the Pace residence, and she knew something horrible had happened.

Mrs. Alden also noted that on several occasions prior to Dr. Pace's death, she had seen a young man whom she does not know by name, who seemed to be peering in windows at Dr. Pace's home. On one occasion, she called the police about the young man, but by the time they arrived, he was gone.

When asked, Mrs. Alden said she did see a boy riding his bike on the morning of Sunday, October 16, 2022. She identified the boy as Jacob Hunter, the son of attorney Patricia Hunter, who works at the law office next door to Mrs. Alden's home. She said the boy often accompanied his mother to work on weekends and rode his bike while he waited for her.

Mr. Bates said he is a bartender and returned home from work at approximately 12:30 a.m. and noticed lights on in Kimberly Pace's residence. Mr. Bates said he thought that was unusual because, even though Dr. Pace was known to stay up pretty late on occasion, she rarely had lights on at that hour. Mr. Bates said he saw no other unusual activity at the house or in the neighborhood at that time or any time previous.

Ms. Falk reported she had borrowed some decorating books from Kimberly Pace a few days prior to her death. When she saw Dr. Pace arrive home at approximately 9:30 p.m. on October 15, 2022, Ms. Falk went over to return the books.

She said she arrived at Dr. Pace's residence at approximately 9:40 p.m. and gave her the books. Ms. Falk reported that Dr. Pace seemed distracted and hurriedly took the books, thanked her, then closed the door. Ms. Falk speculated Dr. Pace might have been upset or worried about something, that perhaps she had someone there in the house or on the phone that she had to get back to. Ms. Falk said she thought she would talk to Dr. Pace the next day.

When asked if she saw anything or anyone suspicious the night of October 15, 2022, Ms. Falk said she did not. She did report that she saw a boy on a bike the next morning, October 16, 2022, but she could not identify the boy.

Mr. Kim said he noticed nothing really unusual. He did see neighbor Arthur Beck out in his backyard at approximately 9:00 p.m. He said that Mr. Beck's floodlights were on, and he could occasionally hear the clang of a hoe or shovel. Mr. Kim said it was not unusual for Mr. Beck to garden after dark, as Mr. Beck seems obsessed with his gardening and has been known to garden late into the night since installing the floodlights.

Mr. Kim said he believed he saw Kimberly Pace's car parked in her drive at approximately 10:00 p.m. but did not recall seeing or hearing Dr. Pace arrive at or leave her residence. When asked, Mr. Kim said he did not think Mr. Beck was still gardening at the time Mr. Kim noticed Dr. Pace's car.

Mr. Kim said he was not feeling well the night of October 15, 2022, and took a double dosage of Nyquil® that night. He said he heard what had happened to Kimberly Pace through other neighbors the next morning.

Ms. Taylor said she did not notice any unusual activity on the night of October 15, 2022. However, she did notice that Kimberly Pace did not take her usual early morning walk with her dog, Thoreau, the following day at approximately 7:00 a.m., which Ms. Taylor sometimes joined her in. She said Dr. Pace's car was parked in her driveway, so Ms. Taylor was sure she was home. Ms. Taylor also noticed that the morning paper was still on the porch, which was not typical.

Ms. Taylor reported that she knocked on Dr. Pace's door to see if she was coming out, but there was no answer. When Dr. Pace did not answer her door, Ms. Taylor said she assumed she was sleeping in or had company and decided not to bother her any further.

Ms. Taylor said she did not recall hearing anything of note the night of October 15, 2022, but said she is a very sound sleeper and is not often awakened in the night by anything.

Dr Isaiah Otis Reid JD Law Student posted a comment in Incident report
I agree totally with the comments above that the prime suspe...
about 3 years ago

TDA posted a comment in Kimberly Pace phone records
Most likely it was Paul phoning up, using Michael's phone, h...
about 11 years ago

Shawn Hotard posted a comment in Carter Nichols interview #2
However, the fact that this kid Carter wealthy and didn’t li...
about 11 years ago

renee posted a comment in Fingerprint analysis summary
amazing beckys fingerprints werent found on the phone, as I ...
about 11 years ago