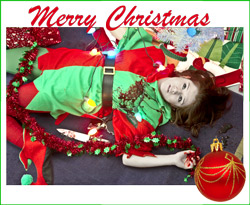 Monday night around 10:30, Bonnie Duncan saw a black SUV smash her neighbor's mailbox and drive away. She immediately called 911 to report the incident.

When the officer attempted to contact the occupants of the residence with the damaged mailbox, he made a very un-merry discovery.

The next morning, as the local press launched its coverage of this tragic holiday murder, YCSD investigators began to gather information about the victim.

While Detectives Armstrong and Murphy were talking to Bonnie Duncan, who was the victim's friend as well as the 911 caller, CSU sent over a preliminary inventory of the evidence they'd collected so far from the crime scene.

Next, the detectives spoke to Caroline's boss, Morgan Pierce, who made a surprising admission.

The detectives had a conversation with Caroline's longtime friend, Gary Gibson. He told them about Caroline's party and the Christmas wish list found at her house.

Caroline's co-worker Nancy Ford was also at the party, and she told the detectives more about Caroline's relationship with their boss, Morgan.

Danny Sullivan has only been working at Santa's Toy Shoppe for a few months, so he had a different perspective on his co-workers to share with the detectives.

Eli Rice, another co-worker, talked to the detectives about Caroline's party and that knife.

Even if she isn't planning a long career at Santa's Toy Shoppe, Jessica Hamilton still has plenty of observations about her co-workers, which she discussed with the detectives.

Billy Colby, who's working at Santa's Toy Shoppe while he's in school, was quick to give his thoughts on how Caroline got along with the men in the workplace.

The last Santa's Toy Shoppe employee the detectives spoke to was Matt Dixon, self-professed ladies man. What did he say his interest in Caroline was?

The next morning, the Crime Lab sent over the preliminary results of their rush analysis on the knife found near the body.

After reviewing the forensics report and considering what they heard from all the witnesses they'd talked to, Detectives Armstrong and Murphy decided to bring some people back in to get more information.

First, they talked to Bonnie Duncan again to find out more about Caroline's personal relationships. Then they re-interviewed Morgan Pierce to see what he had to say about the claims other people had made about him.

The next day, the detectives brought in a person of interest to try to get to the bottom of what happened to Caroline, and they got their answer.