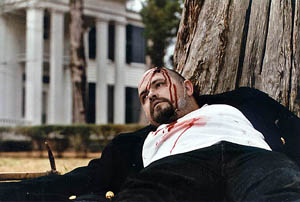 Based on a passport found on the body, investigators tentatively identified the dead man as Rolf Warner of Germany.

At the scene, Detectives Armstrong and Murphy talked to the man who found the body.

Meanwhile, Officers Harding and Winters spoke to the other witnesses at Rowan Oak, while investigators at the station worked to learn more about the other groundskeepers: Pilar, Steve, and Joe.

As the local crime blog jumped on the story, the detectives and additional investigators went to the victim's hotel in search of witnesses and the victim's traveling companions.

Then the detectives talked to the woman traveling with the two men.

Late that afternoon, CSU sent over a preliminary list of evidence collected at the scene along with more information about the possible murder weapon.

First thing the next morning, Detectives Armstrong and Murphy reviewed the criminal histories or lack thereof for the persons of interest so far in the investigation including the Rowan Oak groundskeepers: Adams, Moreland, Potter and Swift.

A short time later, they spoke with one of the Rowan Oak tour guides, after which, they looked into the background of another person associated with the museum.

Then they asked the Rowan Oak curator to come in for some follow-up questions.

While other investigators looked for witnesses who saw Gus after he left Rowan Oak, the detectives talked to the man who reportedly took Lita to breakfast that morning.

Late that afternoon, the coroner's office provided a preliminary report on the early autopsy findings, and the crime lab sent over an initial report on fingerprints found at the crime scene.

After reviewing the reports from the coroner and the crime lab, Detectives Armstrong and Murphy brought one of the suspects in for another interview. Later, the Oxford Weekly Planet reported on the outcome.