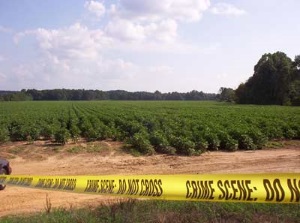 The body was found late today on property belonging to John Reagle, a local farmer who was arrested last night in possession of a human hand.

The Sheriff's Department confirmed this afternoon that although Reagle later claimed it was only a strange root, he did, in fact, have a human hand in the plastic storage container he brought to Duffy's Bar & Grill the night of July 13.

Neighbors of the Reagle Farm say several members of the Sheriff's Department spent most of the day Monday at a location along the private dirt road known as Reagle Farm Road.

Authorities were apparently excavating an area alongside Reagle's cotton field, and Reagle was reportedly present during the excavation.

Sheriff's Public Information Officer Elizabeth Jones declined to comment on the circumstances surrounding the discovery of the body or on whether the body found on Reagle's farm is connected to the hand Reagle had in his possession when he was arrested.

Jones refused to release any details about the body but said an autopsy would be performed to determine the identity and cause of death.

Reagle, who was released on bail this evening, did not return calls requesting comment.