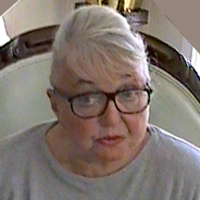 Mildred Stapleton Shegog was born January 8, 1927, in Pascagoula, Mississippi. She is the daughter of Randolph Wallace Shegog and Alice Ulysses Stapleton.

At the age of 19, she met Walter Tooms O'Brian, a young archaeologist from Wyoming who was visiting relatives in Pascagoula. The two married on June 1, 1946.

Walter and Mildred spent several years on various digs throughout the western United States and southern Mexico. Their first son, David Randolph O'Brian, was born in Cairo, Egypt, on August 22, 1949.

After several years abroad, the O'Brians returned to the States in May of 1952. Their second-born, Alice Shegog O'Brian, arrived the following year.

After the birth of Walter Tooms O'Brian II in 1957, the family moved to Washington where Walter Sr. taught at the University of Washington and Mildred worked at home as a proof reader for various publishing houses.

Walter died of a heart condition in June of 1994, and Mildred — overcome with loneliness and financial instability — moved to Oxford, Mississippi, to uncover her roots, which she had heard about from her mother while growing up.

She moved into the house on Van Buren Avenue that was formerly owned by her great-great grandfather, Nathaniel Wallace Shegog.