Is construction site a murder scene or a historical find? 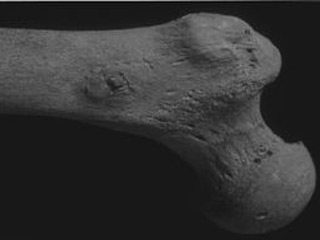 Four Oxford kids were apprehended by University Police this afternoon when they discovered what appeared to be a human femur bone amid construction in the "Y" Building on the west end of the Grove.

"We were just playing around in the abandoned building when I saw a secret chamber in the floor," said 11-year-old Zach Burgess. "It was dark and deep, so I reached down in there and fished out somebody's leg bone."

"The end looked like it had been sawed off," said 13-year-old Rachel McGowan.

Also on the scene were 12-year-olds Melody Cheever and Hunter McGowan, Rachel's brother.

Rachel and Hunter are the children of Ole Miss anthropology professor Thomas McGowan, who was asked about the finding.

"It's hard to tell, at this point, where the bone came from," McGowan said. "We'll have to perform carbon dating tests on the bone to determine its age. It could be anyone's from a Choctaw Indian to a Confederate soldier. It could be that this leg came from a victim of some heinous crime. We just don't know."

When approached about the news of the bones, the chancellor's office responded, "Ole Miss is very proud of our past, and any link that we can find to reinforce our place in history, we are more than happy to examine."

University Police Chief Carl Fisk hasn't ruled out the possibility that the bone was planted on the construction site as a hoax.

"We checked with the foreman, and neither he nor any of his men saw the bone yesterday. There's really no sense in speculating at this time," Fisk advised.

"Until we get the analysis back, we don't know if we're dealing with a recent death, a historical find or just a prank," said department spokesperson Elizabeth Jones.

Preliminary results from the testing are expected within a week.