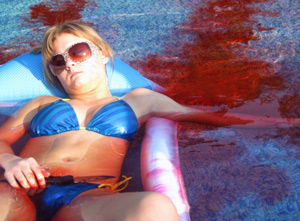 Yoknapatawpha County Emergency Services received a 911 call reporting a body floating in a pool at a residence on College Hill Road. While the detectives worked the scene, CSU put together a preliminary list of evidence at the scene.

Back at the station, the detectives found out more about the dead girl before talking to the witnesses who were at the scene.

Meanwhile, the local press got wind of the story.

Then Detectives Armstrong and Murphy sat down with the woman who called 911 to find out more about what happened that afternoon.

Next, the detectives talked to the family's pool man who actually found the body.

The next morning, the detectives reviewed the call logs on Alyx's phone.

Then, shortly before Alyx's parents were due into the station, Detective Murphy got a heads-up from the coroner.

When Alyx's parents arrived, the detectives sat down with her father first to get more information about his daughter.

When finished with Alyx's father, they talked to her stepmother about Alyx's relationships and activities.

That afternoon, Detectives Armstrong and Murphy brought in the landscaper to find out what he saw at the Byrns residence around the time Alyx died.

After hearing about Alyx's boyfriend from her parents, the detectives asked him to come in for a conversation.

First thing the next morning, the detectives went to the Byrns residence to look for evidence related to the coroner's tip.

Just before lunch, they met with Alyx's best friend to find out more about Alyx's state of mind before her death.

Then they talked to Alyx's other close friend to about Alyx's relationships.

The next morning, Detectives Armstrong and Murphy got a preliminary report on the fingerprints recovered at the scene.

Then they asked Josh to come back in to talk about some of those prints.

That afternoon, they brought Katie back in to find out what she hadn't told them about the relationships in and around the Byrns family.

Then they asked Megan for more information about Katie's claims.

The detectives finally tracked down Alyx's birth mother and brought her in for a conversation about her estranged daughter.

Then they sat down again with the Byrns family chef and asked her to be more forthcoming about her knowledge of the goings-on in the Byrns household.

That afternoon, it was time to talk to Alyx's parents again. This time, they started with her stepmother.

Then they talked to Alyx's father again to get his take on some of the recent revelations.

A little later, they brought in the pool man for another sit-down so he could fill in the details he "forgot" to mention in their last conversation.

The next day, when the detectives went to the Lamoire residence to collect the items Stephen said he removed from Alyx's bedroom the day she died, they got a surprise, so they had him come in again to talk about it.

Late that afternoon, the coroner's office delivered a preliminary report on the autopsy.

When Detectives Armstrong and Murphy got updated fingerprint identifications from the crime lab, they began to formulate their strategy for bringing in those responsible for Alyx's death.

The next morning, the detectives spoke again with a key witness about recently uncovered evidence and learned some surprising information about Alyx's death.

After that conversation, the detectives asked a second key witness to come in to clear up some questions about what really happened to Alyx Byrns.

That afternoon, the Oxford Weekly Planet's Crime Beat column broke the news of who was in custody in connection with Alyx's death.