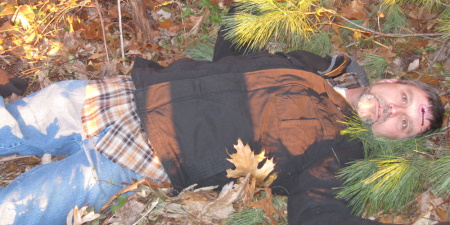 On January 23, 2021, Emergency Services received a 911 call reporting a man's body in a park. When investigators arrived on the scene, they were surprised to discover who the victim was.

After a preliminary inspection of the crime scene, Detectives Armstrong and Murphy spoke to the woman who found the body and called 911 in the cabin where she was staying, east of the body's location.

When they left the crime scene, the detectives went to see the victim's wife to find out what activities he had planned for that day.

The next morning, Detectives Armstrong and Murphy met with the senior member of the district attorney's staff to determine whether his murder might've been job-related.

A little later, Spenser's brother came in to talk to the detectives.

While Detective Murphy checked in with CSU, Detectives Armstrong and Beckwith spoke to the victim's son about their family life.

The Oxford Weekly Planet covered the mayor and sheriff's joint press conference about Spenser's death, while the detectives took a look at what evidence had been collected so far at the crime scene.

First thing Monday morning, detectives went to the District Attorney's office to talk to the employees. While they were there, Detective Armstrong had a conversation with one of the ADAs.

When they left the DA's office, Detectives Armstrong and Murphy decided to drop by a local floral shop to have a chat with the proprietor.

Back at the station, the detectives found some preliminary reports from CSU on prints and phone calls waiting for them.

Later that afternoon, Detectives Armstrong and Murphy tracked down a man whose prints were found in a cabin near where the body was discovered.

Then the detectives talked to a woman who spoke to the victim not long before he was killed.

Bright and early the next morning, Detectives Armstrong and Murphy talked to an ex-con known to have a grudge against the D.A.

When the detectives finished the interview, they found that CSU had some additional information for them.

A short time later, they met with the 911 caller again to ask some follow-up questions.

After lunch, Virginia stopped by the station at the detectives' request to provide some additional information.

Then Spenser's brother came in so Detectives Armstrong and Murphy could ask him about his name coming up in conversations with other witnesses.

The next morning, the detectives spoke to one of Jill's neighbors to try to verify Jill's whereabouts when Spenser was killed.

When they finished, Detective Armstrong had some updated information from the Crime Lab for the team to review.

During the lunch hour, Detectives Armstrong and Murphy tried to clarify a few things with Jill.

A little while later, they met with a local attorney to get his side of the story.

When they finished, they took a look at some early findings from the Crime Lab's firearms analysis.

Near the end of the afternoon, Christy came in to answer some more questions.

The following morning, the detectives spoke to a park ranger who was working at Wall Doxey the morning Spenser Brooks was shot to death.

Then they called Wesley back in to see if he could clear up a few things.

A little later, the detectives had another chat with Virginia to try to find out what she knew about Wesley's claims.

The detectives reviewed the preliminary findings on trace evidence recovered at the cabin and the initial autopsy findings.

Detective Murphy also got a call from the Crime Lab about one piece of evidence.

The next morning, a witness came back in with something to say to the detectives.

A short time later, Alderman Collins and his attorney arrived to meet with Detectives Armstrong and Murphy.

When Kyle was brought in again, the detectives tried to get some information out of him.

Lyn posted a comment in Mindy Fisher bio
Well, helpfull that she is Ross' neighbor, but that seems to be all she could possibly have to do wi...
about 2 days ago

Kenda posted a comment in Virginia Brooks interview #2
She really sounds well meaning albeit oblivious, but it could be a ruse.
about 1 week ago

Kenda posted a comment in Gene Collins bio
Respectable... Sounds like an upstanding citizen.
about 1 week ago