An exclusive report for the Oxford Weekly Planet by Kate Harvey 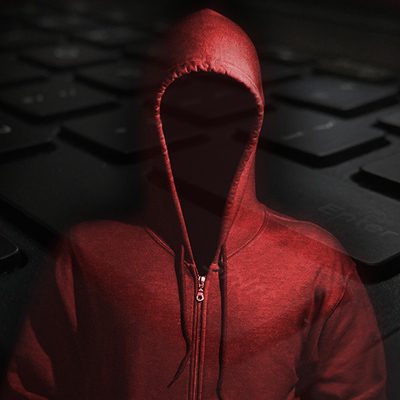 Local novelist Blake Stillwater has confessed that he recently posed online as a curvaceous young woman. The amazing story of his flirtation with being blonde, buxom, 22-year-old "Stella" from Oklahoma emerged in an exclusive interview at his home in Oxford on a balmy afternoon earlier this week.

The writer went online under the guise of being gorgeous Stella and encountered scores of men anxious to set up online rendezvous, phone chats, and real-life dates. He said the deception was an essential part of the research for his upcoming thriller.

"I could see all too easily how cybersex could lead to mayhem and murder," he said.

Just how far Stella went with her cyber relationships, he would not say.

The novelist at home

Stillwater spoke about his research and his writing while sitting on the jasmine-flowered, vine-laced terrace, which overlooks the swimming pool's clear blue water, gently rippled by the breeze wafting through the 100-year-old magnolia and oak trees. Beds of American Beauty roses surround the Stillwater mansion, which must be seen to be believed.

The home, which he shares with his wife Eugenia, has a magical mix of innovative and unusual fabrics and furnishings that create a surprisingly comfortable atmosphere. The strawberry and violet print cushions are so fluffy and the cream couches so deep that you want to sink in them and just stay there forever.

Recessed lighting spotlights paintings, woodcuts, carvings, and sculptures. Artworks range from a gilded Byzantine triptych to Mississippi folk art by Oxford local Catfish Jim. There's even a carved wooden mask from Bali in Indonesia, where the novelist stayed after a promotional tour of Australia last year.

Stillwater's lovely wife of nearly 25 years, Eugenia, is a gracious, welcoming hostess and the epitome of Southern style in an ivory silk blouse, linen skirt, and Manolo Blahnik strappy sandals. When she proffers a plate of incredibly delicious dark chocolate and hazelnut sweets, you cannot help noticing her enormous ring spattered with diamonds. The ring was a 20th wedding anniversary present from her husband.

Even after so many years of marriage, Mrs. Stillwater seems to hang on every word her husband says, her eyes drinking in his every word and gesture.

"Absence makes the heart grow fonder," she commented, almost wistfully. "Blake's so busy these days that we aren't able to see much of him."

It's no surprise this lawyer-turned-writer stays so busy. His first three novels have had international success. The first, Courtroom Conspiracy, was a complex tale of legal deceit set in Chicago, where Stillwater worked full-time as an attorney.

"[The book] was inspired by a conversation I had with friends one night at a dinner party about an unusual case I'd worked on. Somebody suggested that I should write a story about it, so I got up early the next morning and put my thoughts down on paper. I became fascinated with the story and the characters involved and just had to keep writing. Of course, the novel turned out very different from the real-life case."

Did Stillwater take his characters, such as Courtroom Conspiracy attorney hero David Donovan, from real life?

"No, it doesn't work like that," he said. "There are inspirations and influences from my life — people I've worked with, people I've met — but the characters are all fictitious. I like readers to believe that they could be real people, but they're not."

His second book, Dark Plaza, centered on murder and corruption in a fictionalized version of the gambling industry of the South, including Mississippi's dockside casinos.

The third novel, Silencer, began with the murder of gun-collecting attorney Joe Camilleri, shot dead in his home office during his 40th birthday party. The novelist worked on the screenplay for the blockbuster movie that followed but said that bowing to the demands and whims of Hollywood producers was not as professionally satisfying as molding his own work.

That venture into screenwriting took him away from his first love — writing novels — but now he's back with a vengeance.

Clues about his next mystery

Mr. Stillwater described the new book he's working on as a tale of intrigue, illegality, and murder wrapped in tendrils of all the technology we have at our fingertips today.

"Naturally, I can't reveal the details of the plot, but I thought the virtual world would be worth exploring. I've seen some amazing things since I first ventured onto the internet.

"You know, I used to write with a pen and paper and then type up each chapter on a typewriter. These days it seems so old-fashioned to have done that. I confess that I still do jot down ideas in a notebook — things I hear, impressions of people and events — then transcribe my notes later when I get back to my computer."

The author admits that while he's fascinated by all the potential outcomes of online interactions, especially the darker possibilities that provide fodder for his work, he knows almost nothing about what makes those interactions happen.

"I have excellent research help for the technology aspects of this novel. I need that, and I couldn't ask for better expertise."

This security-conscious author is keeping the main story of his latest novel under wraps and even keeps his manuscripts and notes in a wall safe when he's not working with them. However, he was prepared to reveal some details of the research he's done to develop a subplot involving a chat room terror incident.

He laughed as he recalled interacting with strangers online while pretending to be a flirtatious young woman. "The reactions of other men were fascinating. I saw a whole new side of male behavior that I'd heard about but never experienced before. Of course, whether they actually were men or not ... who really knows on the internet?"

Blake Stillwater posing as a woman? It's hard to imagine anything stranger.