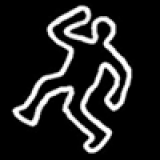 Bernacus
Thursday, August 13 2020
0 Replies
1.4K Visits
0
Votes
Undo
the photos taken at tbe scene show a fairly neat and small puddle of blood for a guy that just took a 10 inch kitchen knife to the guts.

What's going on there?

Was Philip murdered in the kitchen area, or was his body moved and he was killed somewhere else?

Also present was a bloody shoe print.
The photo shows a puddle with very neat and pristine edges.
Either the person stepped in the puddle early, and the relatively small amount of blood, oozed over the site.
Or perhaps there was more blood at the scene that was cleaned up?
There are no replies made for this post yet.
Be one of the first to reply to this post!
Please login to post a reply
You will need to be logged in to be able to post a reply. Login using the form on the right or register an account if you are new here. Register Here »
Forgot Password?