We looked in a trunk in Mrs. Shegog's attic, and it was filled with things that belonged to her great-great grandfather, Nathaniel Wallace Shegog.

His uniform and a tattered Confederate flag were in there, along with some papers and other stuff.

Among his papers, we found this long poem he wrote called "The Treasures of the Academy."

Rachel noticed an alternate rhyme scheme at the end, but we don't know if that matters or if the general just wasn't a very good poet.

Treasures of the Academy
By General Shegog

Drums in my fevered brain call me to attention,

They fog my mind with madness,

Set pace to my intentions,

The reality of defeat causing sadness.

But now is the hour to plan my attack.

Soldiers in the Grove, I in my basement;

Fragile mortality makes me think back

To war and world and in it my placement.

The enemy arrives on a trail laid by fire,

And I, commanding officer, fail to bring force;

Instead I will protect my bounty and conspire

One gets comfortable nestled in the dirty planet's womb,

So I ordered my men to carve through mire and mineral;

Beneath the academy they construct a labyrinth tomb

Where goes the treasure of their pharaoh, their enemy — Gen'ral.

Only a weak fool would serve this army one second more,

And though I be weak, I am no fool, but a crushed ideal,

For there is no other nation but one's own, I implore,

And man must come to terms with what is wrong and what is real.

Honor, what of that? What honor exists in the democracy

Of a country that sends men to die and kill their brothers and sons?

So I shall release my brave, wounded soldiers and throw down my guns.

For I fear — nay, know — the noise of the cannon's shot

And the cause we now have will be over, forgot

As murder and chaos become the honest life. 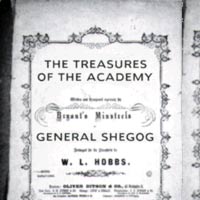 Once had I an honest life

And grand vision, but now tis

And two daughters dead from this.

The boy would be my only heir

But now he is a man of Blue

On his way here and unaware,

He is soldiered with Grant and crew.

This war of family is a plague o'er our head;

Blood against blood, a war impossible to win.

So much have I lost, so many I've loved now dead,

In death and defeat, once more we will all be kin.

I cannot leave my Gold Cross for the Yankees to thieve.

Spanish fortune from O'Brian, who showed me the way

In life, liberty, spirit — his treasure, I believe

Has the power to carry me to heaven this day.

So, to address your wonder,

I know what is higher meant.

I will retreat, in honor,

To an early retirement.

Below the academy my army crawls

To bury my Cross and attend to my scars,

Then there it shall be where the General falls

The answer, it has been written in the stars.

Where skeletons war and riches rest

There is fire in the sky and guns in the ground

To kill North and South and the heaven bound

The Chapel bares the Light … the Body … the Bread

But the earth's riches rot beneath the House of the Dead

Shall go wandering right at the den of Stark's Bait.

And if he put country first, then on to Goldstar Peak

And if he put God first, then turn the other cheek.

And once his eyes on the fourth den do fix

He shall march the rest as a Crucifix

X marks the spot where the sick spirits loom

Where the greed and hatred of man spells his doom,

Where the Confederacy rises to enliven your fears—

You will die if my academy's treasure disappears.