Detective Nelson traveled to the Regalis Veterans Home in Rochester Hills, Michigan, to interview Mr. Duffy in 1998. The following is transcribed from the interview tape.

Detective Nelson: Mr. Duffy, I don't want to take up too much of your time, but I have some questions regarding Howard Hammack.

Bob Duffy: Too much time? Do I look busy to you?

Bob Duffy: I tell you, detective, because you've come all the way from Mississippi to visit, that I've got nothing but time. A man my age should have one foot in the grave, and I can't even catch a cold in this place. They've got more machines and whoozits to keep me living than they know what to do with. Now, what do you care to know about Ham?

Detective Nelson: Bob, I've been working an old case at the insistence of Doris Hammack.

Detective Nelson: No, sir, she's not with me today. Do you remember Doris?

Bob Duffy: Sure, I do. My kid Billy and her, they used to play together. Her old man sure could smack that kid around. Back in the day. You know, I've actually caught myself wondering about her every now and again over the years. Did she turn out okay?

Detective Nelson: She had a rough upbringing, as you can imagine. She came to Oxford earlier this year, looking for clues to her identity. You see, it's only recently that she has accepted herself as the daughter of Howard Hammack. Do you remember what happened to her after Howard died?

Bob Duffy: I do. Oh, jeez… that old hag, Bea Carmichael—you know who I'm talking about?

Bob Duffy: I sent her a telegram the day Howard died, and she was up here that very weekend. She was real pushy, demanding up and down that she be able to go through Howard's apartment. And she did it. Spent about a day locked up in there and then left without saying anything to anybody. The kid was gone with her. God only knew where.

Detective Nelson: She was taken to the Immaculata Catholic home for girls. She grew up being pushed around from one foster home to the next.

Bob Duffy: You realize, we couldn't have taken her ourselves…

Detective Nelson: Certainly, Bob. Doris is fine. She has made an astounding rebound from her childhood. But there are some things we still need to be clear on. Did Howard ever speak with you about living in Mississippi?

Bob Duffy: All the time. It was like he still lived there in his head.

Detective Nelson: Did he ever speak to you a murder in Oxford? Richard Izard, an old boss?

Bob Duffy: Yeah, we used to swap tales. I'll never forget the Izard stories. You gotta understand though, me and Ham would sit around blasted out of our heads trying to see who could piss higher. It was all outta fun.

Detective Nelson: What do you know about the Izard murders?

Bob Duffy: I know that I've always dismissed it as a fairy tale. One of Howard's fishing stories.

Detective Nelson: What did Howard tell you about the Izards?

Bob Duffy: He used to tell me, "Dick Izard. That's why you don't cross Howie Hammack." Old Hambone. "I've bashed a skull or two in my day," is what he said. Hammy was hot under the eyeballs, mister detective.

Detective Nelson: How do you mean?

Bob Duffy: He was always making noise about how he'd beat up so‑and‑so and took care of some guy. It was all talk. You couldn't make out his slurred speech half the time, much less sort through his tall tales. But Dick Izard, that one was always the same. [PAUSE] Yep, he said he killed him. Said he bashed his head and the head of his pretty wife too. Used to say he left them with headaches from hell.

Detective Nelson: What about the children?

Bob Duffy: Not at first. But the more he drank and the more he hung around, he started mentioning those kids. [PAUSE] Goddammit, that wasn't real. He— he couldn't have… could he?

Detective Nelson: The bodies of those kids were found in the pond behind his old house last week.

Bob Duffy: [PAUSE] It's something you dismiss. When you seen what I seen in France, during the war… well, hell, a guy talking about beating a couple of hayseeds just doesn't even register. He was a drunk, a meathead. Hell, we both were. But over the years, I've mellowed, you know?

Detective Nelson: What did he tell you, Bob?

Bob Duffy: Jeez, let me think. … That bastard. I was only half-listening, you know, stoned out of my own head. But I can hear him and see him, sweet Jesus, swinging his arms around. "I hit him with the shovel and blood shot out of his head like a sparkling fountain," he would say. There was some mention of a layoff.

Detective Nelson: Anything else?

Bob Duffy: He said he wanted to let off some steam. He was blitzed as usual—no real rhyme or reason to it. Just went off to his boss's house and laid him and the missus out cold. It was hard to buy into.

Detective Nelson: I can see why. What else?

Bob Duffy: Then, like I said, a year or so later, he started talking about those kids. God, he said he waited for them and took them out to his place. Smacking 'em around and telling 'em, "You know what happens to crybabies" or something. My God, he used to say that to Doris too, when she would cry. She sat on that fire escape and trembled every time I was over there, and he was into the sauce. Then … yeah … let me see, he said he strangled the girl. [PAUSE] Oh, he was a sick one. And he shot that kid in the back. What a worm.

Detective Nelson: He told you all that?

Bob Duffy: Yeah, he tossed them out back in the water hole. He used to say he was just feeding the turtles. [PAUSE] We laughed about that. Can you imagine? I had no idea…

Detective Nelson: Did he ever mention anyone else's involvement?

Bob Duffy: Bea was around, I'm pretty sure. But hell, he said he'd thrown her in the pond a couple of times. He used to say, "The bitch was so full of hot air she kept rising to the top, wouldn't sink."

Detective Nelson: But never the hint that he was hired to do it?

Bob Duffy: No, no. Just made it sound like he got the idea in his head and set out to make it happen. But like I said, you didn't believe it. Ham was withering away all the time I knew him. He wasn't convincing as a killer, though he sure was the violent type. He tried to get into some action with one of the boys down at the plant once and took a good beating for it. He and I scuffled quite often, come to think of it.

Detective Nelson: Do you recall a man named Elliot Perch?

Bob Duffy: Perch, let's see. He was one of the guys from the Chicago union. Yeah, he was at the plant quite a lot for a while.

Detective Nelson: Did Howard have much contact with him?

Bob Duffy: I couldn't say for sure. Although I don't think Ham was in good favor with the Chicago boys. You know that fight I was telling you about in the plant, where Ham got his goose cooked?

Bob Duffy: He was supposed to be working this guy over. It was some silly union business. He was screwing up somehow. Anyway, Ham was supposed to beat this guy into submission, but he let him get the upper hand. Yep, old Ham got worked over pretty good. So he wasn't held in the highest regard by guys like Perch and the rest of 'em.

Detective Nelson: Was there any contact with anyone else from Oxford?

Bob Duffy: Just Bea. He talked to her every now and then. He never talked with anyone else that I ever knew of. Ham was apartment 9A, and I was 9B, and there was a phone in the hall for every apartment on that floor. He never used it. He pulled it off the wall once, I remember. One of the ladies from down the hall was yakking on it too much, so he jerked it down.

Detective Nelson: Howard didn't mention any other murders by chance?

Bob Duffy: No. He mainly talked about the people he was gonna kill. Anybody who mouthed off to him was fair game, but he was all talk. He even threatened to kill me, and I told him if he did that, I'd be waiting to jump him outside the gates of hell when it came his time. But I'd bet he's down there waiting to jump me.

Detective Nelson: Did Howard tell you anything more about the murders before he died?

Bob Duffy: No, in fact, I didn't visit with Ham that much before he died. By that time, he had become way too obnoxious and aggravated. He was drinking two and three bottles a day of whatever he could find. He wanted out. He couldn't get a girl. Didn't have the money or energy to go back to Mississippi, which he griped about every day I knew him. He wasn't happy being a father. He wasn't happy period. Maybe all that death and horror got to him. It sure as hell got to me. 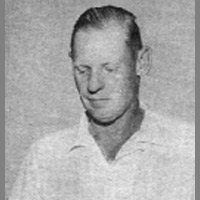 Detective Nelson: Listen, I've got this photo with me. It's pretty old, but maybe you can tell me if you recognize this man?

Detective Nelson: This is the man you knew as Howard Hammack?

Bob Duffy: Sure is.

Bob Duffy: Like I said, I can't attest to the truth, but I sure don't doubt it now, come to think of it. Say, could you give my regards to Doris? I'm sure she doesn't remember me, but I sure feel bad about her.

Bob Duffy: Thanks, detective. And I don't suppose I could get you to scrounge up some of those funny cigarettes for me, huh? You know what I'm saying. It's so damned sterile in here.

Detective Nelson: I'm sorry, Mr. Duffy. I couldn't possibly help you out with that.

Bob Duffy: Oh well. It's back to watching birds for me. Good day.