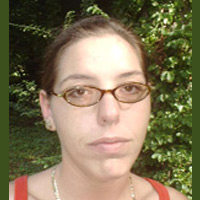 Kristi Dawes boarded the 3:30 a.m. Magnolia Transit bus to the Memphis airport in Oxford on Friday, January 3, 2014. Detectives Armstrong and Murphy interviewed her at the Yoknapatawpha County Sheriff's Department. The interview was recorded with the witness's knowledge and consent.

Detective Armstrong: Ms. Dawes, thank you for coming in. Please state your name and address for the record.

Kristi Dawes: My name is Kristina Megan Dawes, and I live at Old Maxwell Place, Apartment Number 17, in Oxford. I'm a student at the University of Mississippi.

Detective Armstrong: You were on the 3:30 a.m. Magnolia Transit bus that went to the Memphis airport on January 3, 2014, is that correct?

Kristi Dawes: Yes, it is. I was catching a plane to Miami to visit my sister for the weekend. She had a beautiful baby boy that Thursday, 10 lbs. 4 oz.

Detective Murphy: Congratulations. What time did you arrive at the Eastgate Shopping Center to catch the bus?

Detective Murphy: Did you see anyone or anything when you got to the shopping center or while you were on the bus, waiting for it to leave?

Kristi Dawes: I've been thinking about it since you called me to come in, and I think I remembered something. There was a car parked at the curb by a fire hydrant down the street from the shopping center, over behind the McDonald's.

Detective Murphy: What kind of car?

Kristi Dawes: I couldn't really tell. I was sitting in a window seat and could see it across the parking lot down the street. It was right down from McDonald's, on that intersection road with University Avenue … what is that road?

Detective Armstrong: McLarty Road is the one you may be thinking of. Right in front of the tire shop, Pro Tire?

Kristi Dawes: That's right. It was at the curb, right by a fire hydrant, and I thought, "That person is going to get a ticket. Are they having car trouble?" It was weird. It was just sitting there, idling. I remember I was just staring out the window, and it caught my eye. It might have been a Toyota or a Subaru or something like that, just a little two door hatchback. I couldn't tell for sure, but I think it was black or a dark color anyway. The windows might have been tinted, but it was too dark to tell. I couldn't see anyone in the car at all, but the car was running. I could see the exhaust.

Detective Armstrong: What happened then?

Kristi Dawes: Nothing. It just sat there.

Detective Murphy: Do you know Cameron and Caitlin Maxwell, the ice skaters from Oxford?

Kristi Dawes: I know of them. I don't know them. I've watched them on television. They're very popular.

Detective Murphy: So you know what they look like?

Kristi Dawes: Yes, I do.

Detective Murphy: Did you see either one of them that morning?

Kristi Dawes: No, there wasn't anyone else around. Everything was closed, so it would have been easy to pick out someone right there.

Detective Armstrong: But you saw this black car?

Kristi Dawes: Yes, I did. At least, I think it was black. It was there when we pulled out. I remember glancing over at it, and then the person sitting next to me said something and I looked away. I got distracted, but as we were pulling out of the parking lot onto University, I think the car peeled out.

Kristi Dawes: I think so. I heard the loud sound of tires screeching, but by that time, we were going up University towards the highway exit. I can't say for sure if it was that car, but I think it was. It was the only car around.

Detective Armstrong: You didn't see the car again on the highway near the bus?

Kristi Dawes: No. I didn't think anything else about it. Do you think the person in that car could have done something to those skaters?

Detective Murphy: We're just trying to get as much information as we can about what was going on that morning.

Kristi Dawes: Have I helped?

Detective Murphy: Yes, you have. We'll be calling you again if we need more information about the car.

Kristi Dawes: I'll be glad to help. My brother is going to be a policeman.

Kristi Dawes: That's right. He's in school here too. Bobby Dawes. You should give him a job when he graduates.

Detective Armstrong: Maybe so, Ms. Dawes. Have him give us a call. Thank you for your time.