Maggie Jenkins talked to Caitlin Maxwell when she was in town, according to Caitlin's mother, Robin Maxwell. Detectives Armstrong and Murphy interviewed Maggie at the Yoknapatawpha County Sheriff's Department. The interview was recorded with the witness's knowledge and consent. 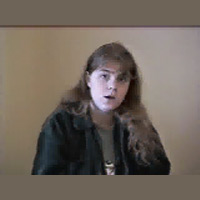 Detective Armstrong: For the record, please state your name and address.

Maggie Jenkins: My name is Margaret Kay Jenkins, and I live at 510 Van Buren in Oxford. Please call me Maggie.

Detective Armstrong: Maggie, you and Caitlin Maxwell are good friends, is that right?

Maggie Jenkins: We used to be a lot better friends when we were in middle school. Once she and Cameron started getting really good at skating, I didn't see them that much. But yeah, we're still good friends.

Detective Murphy: When she's out of town or busy training, do you two still stay in touch by email, text messaging, Facebook, anything like that?

Detective Murphy: And when was the last time you heard from her?

Maggie Jenkins: Not since the night before she left. But I wasn't really expecting to. She's going to be really busy in Boston. I mean, it's Nationals.

Detective Armstrong: Did you and Caitlin see each other when she was home for the holidays?

Maggie Jenkins: Only a couple of times. We went to a couple of movies, the new Hunger Games movie and The Wolf of Wall Street.

Detective Armstrong: Did she talk to you about anything that was bothering her?

Maggie Jenkins: She didn't seem bothered by anything. She was really excited about going to Nationals. Cameron was too.

Detective Armstrong: Did she ever talk to you about her brother Austin?

Maggie Jenkins: Not really. He seems like a nice guy. I mean, he's always nice to me. But she doesn't talk about him much. One time, she told me I should listen to the blues album that he was putting together.

Detective Murphy: When was the last time you saw Caitlin?

Maggie Jenkins: I guess it was New Year's night. I called her up. That was when we went to see The Wolf of Wall Street. We just went in right after the lights went down and sat in the back. I don't think anyone even knew she was there. I was glad for that.

Detective Armstrong: Did she have a problem when people saw her out?

Maggie Jenkins: At first, yes. It seemed like she and Cameron both had to sign autographs every time they went out in public. People were always asking them to skate to a certain song because it was their favorite song or whatever. It just drove Cameron nuts. He didn't want anyone picking out their music but he and Caitlin. But then it sort of cooled down. Her parents let it be known that they wanted some privacy. Caitlin is shy. She's not big on all that attention.

Detective Murphy: Does Caitlin have any boyfriends that you know about?

Maggie Jenkins: No. She's always skating and training. She doesn't really have time for anyone like that. She just skates and trains all the time. And then, when she's here in Oxford, she mostly likes to sit around her parents' house at night usually. So does Cameron. They don't have a social life at all.

Detective Murphy: Did Caitlin ever fight with her parents? Or talk to you about fighting with them?

Maggie Jenkins: I never saw her fight with them. They always gave her whatever she wanted, I think. She's never complained. They're always buying her clothes and skating outfits and buying plane tickets to go to their competitions. I'd say she's very happy. She thinks her parents are cool.

Detective Armstrong: Did Caitlin or Cameron have any enemies at school that you knew about, even when they were a lot younger? You've known both of them for several years, right?

Maggie Jenkins: I've known both of them for a long time. She never had any enemies that I know of, and neither did he. Sure, a lot of kids picked on them in school, but those kids were only jealous, I think. Cait and Cam were superstars even back then, on TV several times, on magazine covers. They were bigger than all those kids. So they got picked on.

Detective Armstrong: But there was no one who would want to harm them that you know about?

Maggie Jenkins: No one at all. Everyone liked them when they got to be celebrities. They're good for the town, you know.

Detective Murphy: Did Caitlin ever say anything about wanting to run away? Wanting to get away from her life?

Maggie Jenkins: No, not to me. She loves skating. And even if she did want to run away, she wouldn't do it now, right before Nationals. After all that work? Why would she bail when it's all about to pay off?

Detective Murphy: What about Cameron? Would he want to run away?

Maggie Jenkins: I doubt it. I mean, it's the same thing for him. Why would he do it now of all times?

Detective Armstrong: Just for our records, where were you on the morning of January 3rd?

Detective Murphy: Maggie, is there anything else that you think we should know?

Maggie Jenkins: Just that I hope that you find them. It's horrible, absolutely horrible that something might have happened to them.