On Monday, April 14, 1958, Deputy Larry Kuhn traveled to Memphis, Tennessee, to try to corroborate union organizer Elliot Perch's whereabouts on the day of the murders, April 11, 1958.

Deputy Kuhn visited the Kit Kat Club of Memphis, where Perch claimed he was during part of that day.

The following interview summaries are taken directly from the 1958 case files.

McDougal remembered Perch and said Perch has been in several times over the previous 4–6 weeks.

McDougal stated that he recalled Perch arrived at the Kit Kat Klub around 8:00 p.m. on Friday, April 11. McDougal said he did not recall noticing any signs of injury on Perch that night.

McDougal said Perch took a liking to one of the dancers, Trina Vail, on the night of April 11 and bought her several drinks.

McDougal said Perch and Vail left together when her shift ended at 1:30 a.m.

Marks stated that she recalled Perch very well. Marks said that she and Perch went to the Tic Toc Club, an after-hours club on the strip, after her shift ended at the Kit Kat at 1:30 a.m. on April 11.

Marks stated that they were at the Tic Toc until approx. 4:00 a.m. and then went to her apartment.

Marks said that Perch had a mild black eye, which he told her was from a fight earlier in the day.

She said that she did not recall seeing any other injuries on Perch's body.

Marks stated that Perch did not mention any murders in Oxford. 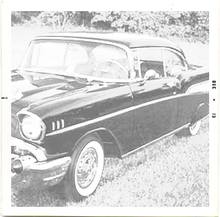 Perch's vehicle is a 1957 Chevy Bel-Aire with white fins.

The new tires on this vehicle did not match the tire tracks found at the murder scene.