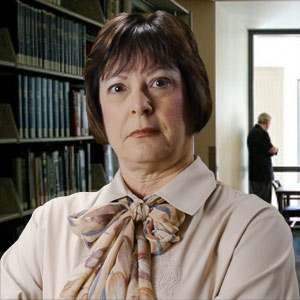 Carol Fitch has been the English department's senior secretary for many years and was at the Rowan Oak event the night before Douglas Reed's body was found.

Detective Murphy: Well, Ms. Fitch, you know the drill. Please state your name and address for the record.

Carol Fitch: My name is Carol Fitch. I live at 665 North 14th Street, and this is just outrageous, seeing as I am completely innocent.

Detective Parker: You do realize that you have the right to an attorney.

Carol Fitch: I am fully aware of my rights, detectives.

Detective Parker: And you're willing to continue without counsel present?

Carol Fitch: As I said, I am innocent and am therefore perfectly capable of defending myself. Expect to hear from my lawyer after I'm released.

Detective Murphy: I wouldn't plan on going anywhere just yet, Ms. Fitch. Detective Parker and I were surprised to find out from one of your administration colleagues that you had taken the entire week off.

Carol Fitch: I've worked tirelessly all my life. It was about time I used my vacation days.

Detective Murphy: Getting it in before fall classes start?

Carol Fitch: The calm before the storm, if you will.

Detective Parker: Or were you afraid of your Ole Miss coworkers finding out you murdered Professor Reed?

Detective Parker: Did you avoid going to work because you were expecting us to come and arrest you?

Carol Fitch: Arrest me? For what? Killing Doug Reed? If I were truly guilty, I would have skipped town a long time ago.

Detective Murphy: But you didn't, Ms. Fitch. Is it possible that, deep down, you feel responsible for his death, which is why you stayed to face the consequences?

Carol Fitch: How many times must I say it? I'm innocent! I wasn't the one who pulled the trigger on the gun that killed Doug!

Detective Parker: But you were there when the shot was fired.

Carol Fitch: Really? How is that possible? If Doug Reed was shot at 9:30 p.m. at the Conference Center, and I was already at Jill's house by 9:15 p.m., how could I have been there to shoot the bastard?

Detective Parker: We didn't say that you shot Professor Reed. However, we have multiple eyewitness accounts that place you and Ms. Osborne at Rowan Oak well past 9:00 p.m., as late as 10:00 p.m. Do you have anything to say about that?

Detective Murphy: Look, Ms. Fitch. The jig is up. We know that Dr. Reed was trying to sabotage the presentation by Jake Hemphill and Dr. Carlson. And you knew as well, which is why you followed him to the conference center to stop him.

Detective Murphy: Take a breath, Ms. Fitch. This will go a lot easier if you calm down and cooperate with us. What happened in the conference center that night?

Carol Fitch: I left the Rowan Oak dinner and followed Doug to the conference center after seeing the video that Monte took. I was … outraged. Plus this seemed like the perfect opportunity to put an end to Doug's reign of terror.

Detective Parker: End? So you followed him with the intent of murder?

Carol Fitch: Of course not! Catching him red-handed would have given me fodder for enough bad press to effectively end Doug's career. His actions were, after all, the quintessence of academic dishonesty.

Carol Fitch: I didn't think of it that way. I wanted to confront Doug myself and have the satisfaction of telling him to his face who he could thank for destroying his career.

Detective Murphy: Did anyone go with you to confront Mr. Reed?

Carol Fitch: No, I went alone.

Detective Parker: And what happened when you caught up to Professor Reed?

Carol Fitch: It was like startling a wild animal. Doug was furious to the point of violently lashing out. I had no choice but to pepper-spray him.

Carol Fitch: I didn't, all right? After that night, I threw it out in the parking lot of the Mid-Town Shopping Center. I never thought some poor high school student would find it, much less take it to school. It's not something I'm proud of.

Detective Murphy: Pepper-spraying Reed or the fact that you threw out the pepper spray?

Carol Fitch: Of course, I meant throwing it out. I was in a state of panic the next day. Reed deserved that face full of pepper spray. I only wish I'd done it sooner.

Detective Murphy: Obviously, Mr. Reed wasn't pepper-sprayed to death. What happened after that?

Carol Fitch: Doug was hysterical at that point. He was screaming from anger or pain or both. I didn't know. He … he pulled out his gun. That's when I … I tried to take the gun away from him. We wrestled for a while, and sometime during the struggle, I heard the gun go off, and … the next thing I knew, Doug was on the floor, silent and bleeding. It was an accident, I swear!

Detective Parker: If it was self-defense, you didn't think to call the police?

Carol Fitch: Ha! Doug was clearly dead, and my fingerprints were all over that gun. I was full-out panicking at that point.

Detective Parker: How did the gun end up at Goolsby's Yard and Garden?

Carol Fitch: I put it in my purse, and on the way back to Rowan Oak, I passed Goolsby's. That's when I decided to stash it in a flower pot. Guess I could've picked a better hiding place.

Detective Murphy: While I appreciate your cooperation, Ms. Fitch, there's something that still confuses me. If you weren't at Ms. Osborne's house that night, why did she tell us that you were?

Carol Fitch: I asked her to cover for me. Jill is such a loyal friend that she agreed to help me. She had nothing to do with any of this.

Detective Murphy: Was Ms. Osborne home the whole night, from the time she left Rowan Oak at 9:00 p.m.?

Carol Fitch: Yes, she was.

Detective Parker: Then who was with you at Rowan Oak at 10:00 p.m. that night?

Carol Fitch: I … must have run into someone there when I returned.

Detective Parker: Ms. Fitch, as it stands, you're facing murder charges. Do you really want to add obstruction of justice on top of everything else?

Carol Fitch: Detectives, I don't have any children of my own. Since meeting Jill, she has been like a daughter to me. I won't say anything to incriminate her because I believe she's innocent. Just leave her be. You've already arrested me and gotten your confession. Isn't that more than enough?

Detective Parker: Not when we know it's not the truth.

Carol Fitch: Well, I don't have anything else to say—about anything.