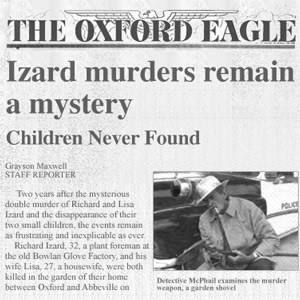 Two years after the mysterious double murder of Richard and Lisa Izard and the disappearance of their two small children, the events remain as frustrating and inexplicable as ever.

Richard Izard, 32, a plant foreman at the old Bowlan Glove Factory, and his wife Lisa, 27, a housewife, were both killed in the garden of their home between Oxford and Abbeville on April 11, 1958.

The murder weapon, a garden shovel belonging to Mr. Izard, was found on the ground near the bodies.

The bodies were discovered by a local mail carrier, Thomas Hinkley, at 2:50 p.m. that Friday. Reports showed that the Izards had been dead less than two hours at the time, but Mr. Hinkley had seen no sign of any unusual vehicles in the area during his route.

The two children, 6‑year‑old Ricky Jr. and 2‑year‑old LeAnne, seem to have simply vanished into thin air. The discovery of a blanket and cap in a local creek led to fears that the children had drowned, but no sign of bodies has been found anywhere around the usually shallow creek in two years' time.

Suspects were never in short supply after the murders, from the mail carrier and young Ricky's bus driver to 153 men and women Mr. Izard had laid off from Bowlan Glove Factory that morning to an "outside agitator" union organizer. But no evidence was found to conclusively link any of the suspects to the murders, and no arrests have been made.

The Bowlan Glove Factory shut down in late 1958, due to decreasing demand for work gloves and "unfair competition" from plants further south, according to factory spokesmen.

Two years later, the odds of the case being solved grow more slim with each passing day.

"We'd love to find out who did it," said a spokesman for the Yoknapatawpha County Sheriff's Department said. "Somewhere out there is a murderer who, so far, has gotten away with it. But we've exhausted all the leads at this point."

Is the case closed then on the murdered Izards and their missing children?

"It won't be closed until we solve it," said Detective Jack McPhail. "But it's fair to say it's on a less-active status now."

Since the murders, the Izard farm has lain vacant. Local teens have built an impressive collection of haunted house stories about the Izards and their slowly decaying house.