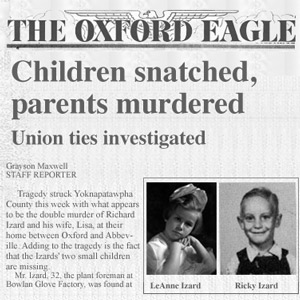 Tragedy struck Yoknapatawpha County this week with what appears to be the double murder of Richard Izard and his wife, Lisa, at their home between Oxford and Abbeville. Adding to the tragedy is the fact that the Izards' two small children are missing.

Mr. Izard, 32, the plant foreman at Bowlan Glove Factory, was found at about 3 p.m. Friday in the garden of his lovely country home, horribly beaten by his own garden shovel, according to Sheriff Ed West of the Yoknapatawpha County Sheriff's Department.

"Whoever it was, really worked him over," Sheriff West said.

Mrs. Izard, 27, was found nearby. Neighbors who saw the tragic site said that her wash was only half-hung, and her clothes basket was on the ground nearby. It's unclear whether she was killed by the same shovel used on Mr. Izard or by some other means.

Of the two Izard children, not a sign has been found. Ricky Jr., age 6, and little LeAnne, only 2 years old, have apparently vanished with barely a trace. Wednesday, after days of searching the area, the baby's blanket and little Ricky's cap were found washed up on the bank of Hawkins Creek, downstream from where the creek runs past the Izards' farm.

The bodies were discovered last Friday afternoon by mailman Tommy Joe Hinkley, when he attempted to deliver a mail‑ordered pair of boots to Mr. Izard.

"He'd been looking for them boots for a month or so, asking about them every so often," Mr. Hinkley said. "That's the reason why I took the box on up to the house when I saw it was from Sears. Didn't want to chance them boots getting lost or stole from out there on the road. Not that anybody around here would do that."

Police have no theories yet about the deaths or the vanished children, but unofficial explanations abound. On condition of anonymity, one deputy said that it looks like the children tried to cross the stream and probably drowned.

Mrs. Euple Sturgis, Primary Sunday School teacher at Bethlehem Baptist Church, said that Mrs. Izard was terrified of "those communists preaching union down at the plant."

Mrs. Titus Hawkins, nearest neighbor to the Izards, opined that the children probably ran away in fear and are hiding somewhere. She encouraged all Yoknapatawpha Countians to search out their land carefully for hidden children.

It seems likely, sources say, that the murders were related to the layoffs at Bowlan Glove Factory Friday. Richard Izard had been given the unpleasant job of delivering the news of their layoffs to 153 employees of the factory. After handing out the bad news, Mr. Izard left the factory premises.

The factory was shut down at noon Friday for a long weekend, some say to give the laid-off men time to cool down.

Bowlan Glove Factory has been going through a hard time in recent months, culminating in a nasty union vote last Thursday. The factory voted to reject the union. Some employees say that the men who were laid off on Friday were the ones who had been most in favor of unionization.

Local reaction is expressed quite well by Rev. Amos Champion of the Bethlehem Baptist Church, where Lisa Izard kept the nursery.

"We always think this kind of thing can't happen to us in a good, God-fearing town like Oxford," Rev. Champion said in his sermon Sunday. "But opening our doors to liberal, subversive ideas like labor unions can only leave an entryway for the Devil and his evil as well."