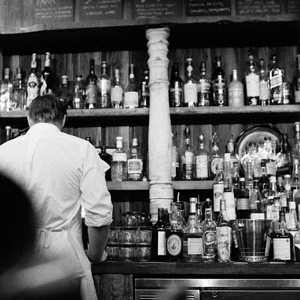 In 1958, Detective McPhail and the deputies assigned to the Izard murder cases conducted over 500 interviews with suspects. Only those interviews that were directly relevant to the investigation are included in the 1958 case file summaries.

On Saturday, April 12, 1958, Detective McPhail interviewed Travis Gilley, bartender at Sid's Tavern, to try to corroborate the whereabouts and timelines provided by numerous witnesses who had claimed to be at Sid's on April 11, 1958.

The following interview summary and timeline are taken directly from Travis Gilley's statements in the 1958 case files.

Gilley helped to reconstruct the movements of those at Sid's Tavern following the layoffs on Friday. He confirmed the following time frames for the prime suspects in the case.

He knows the Bowlan crowd very well, stated that most arrived right around noon and the first big crowd left shortly after the fight between Jimmy Warren and Perch.

He stated that the majority of the rest stayed until 4:30 to 5:00 p.m. before clearing out.

* Gilley did not know when Mitchell left Sid's.