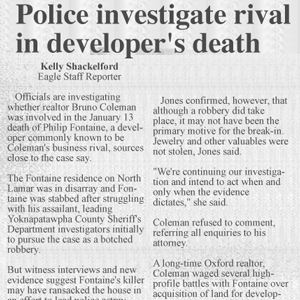 Officials are investigating whether realtor Bruno Coleman was involved in the January 13 death of Philip Fontaine, a developer commonly known to be Coleman's business rival, sources close to the case say.

The Fontaine residence on North Lamar was in disarray and Fontaine was stabbed after struggling with his assailant, leading Yoknapatawpha County Sheriff's Department investigators initially to pursue the case as a botched robbery.

But witness interviews and new evidence suggest Fontaine's killer may have ransacked the house in an effort to lead police astray, according to a source familiar with the investigation.

Sheriff's Department public information officer Elizabeth Jones would not confirm whether Coleman is an official suspect, saying only that deputies are questioning all Fontaine's known associates. However, the Eagle has learned that search warrants for Coleman's home and for "biological samples," such as hair and DNA from Coleman, have been issued. Similar search warrants were also issued for two other persons of interest, both current or former Fontaine employees.

Jones confirmed, however, that although a robbery did take place, it may not have been the primary motive for the break-in. Jewelry and other valuables were not stolen, Jones said.

"We're continuing our investigation and intend to act when and only when the evidence dictates," she said.

Coleman refused to comment, referring all enquiries to his attorney.

A long-time Oxford realtor, Coleman waged several high-profile battles with Fontaine over acquisition of land for development projects. In 1994 both businessmen submitted bids to develop what is now the Eastgate Shopping Centre, publishing warring attack ads in the Eagle, and Coleman's office was vandalized by unknown miscreants. Neither received the bid.

In late 2011, Coleman and Fontaine were involved in a physical altercation in the Oxford Branch of BancorpSouth that resulted in both men being removed to the Yoknapatawpha Sheriff's Office.

When Fontaine died, he was competing with Coleman for a state redevelopment grant to help the region's economic recovery. Fontaine had proposed razing three struggling farms along Highway 7 to build a retail shopping center, while Coleman planned renovation and expansion of the Oxford Centre to five stories.

John Franklin, owner of one of the three farms that Fontaine proposed razing, declared that "Mr. Coleman would never do such a thing. I've always been a big supporter of his and I never liked Fontaine a bit. "

Sources at the Yoknapatawpha Sheriff's Office say the investigation is ongoing.

Bruno Coleman was one of the victim's business competitors. It's no secret that the two men did not like each other and often had conflicting interests.

As a longtime bartender at a popular bar & grill, Will Sands knows a lot about the people who come in and what they're talking about.

Officially, Dawn Thurman was Philip Fontaine's personal trainer, but it was an open secret that she was also his mistress.

The detectives re-interviewed Grant Fontaine to try to nail down where he really was the night his father was killed.

The detectives re-interviewed Joey Beecher to review his alibi and to find out if he knew Philip Fontaine was considering changing his will to benefit Joey.

The detectives asked bartender Will Sands to come in again so they could try to find out if he "forgot" to mention anything in his first interview.

Kyle Parker works as a personal trainer. Most of his clients are women, and he provides additional services to some of them, including Ashley Fontaine.

The detectives pressed Grant Fontaine for more details about his fight with his father and whether he knew about the $15,000 cash his father reportedly had.

The detectives re-interviewed Raquel Santos to learn more about her boyfriend Benito Flores and her fight with Ashley Fontaine. Warning: Contains some strong language.

While the Flores/Santos search was still ongoing, the detectives re-interviewed Benito Flores about his whereabouts the night Philip Fontaine was killed.