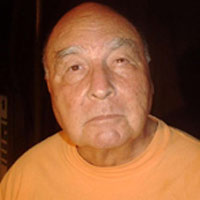 Milo Moss is the father of Sandra Moss, the Barksdale Literature Conference organizer, and was present at the reception where the victim collapsed. Detectives Armstrong and Murphy interviewed him at the Yoknapatawpha County Conference Center. The interview was recorded with the witness's knowledge and consent.

Detective Murphy: Good morning, sir. Would you please state your name and address for the record?

Detective Murphy: Thank you. Were you at the cocktail reception last evening where Mrs. Coates collapsed?

Detective Murphy: We understand that Mrs. Coates was involved in an altercation with your daughter, Sandra.

Milo Moss: You mean Diane started a fight with my daughter. It was some stupid thing. Wanted to know what the deal was with the "green things" mixed with the nuts. Why make a scene about dehydrated peas, especially when the room is full of perfectly decent and respectable people.

Detective Armstrong: Did you know there was some animosity between your daughter and Mrs. Coates?

Milo Moss: You know, Sandra always complained about her. In fact, she told me not long ago she was about ready to get another assistant. Sandra really tried to handle the situation professionally, but Diane just kept on acting, well, like a baby, throwing tantrums all the time. But lamenting lugubriously about legumes was the last straw. Sandra pulled me aside at the reception and told me she was going to get rid of her A.S.A.P. You know, I think it was just at that time there was a hush in the crowd. I turned around and saw her, um, Mrs. Coates, on the floor.

Detective Armstrong: Did you do anything at that time?

Milo Moss: I rushed over to see if I could help. It's an instinct. You know I'm a healthcare professional, a dentist. I immediately took Diane's pulse, which was weak and thready. But her teeth were in excellent shape. She must have flossed like a maniac.

Detective Murphy: How nice for her. So according to your assessment, Mrs. Coates was alive after she collapsed.

Milo Moss: Oh, yes, but she was holding on by a string. It's amazing how fast the EMTs got there. It was like they were just around the corner.

Detective Armstrong: Did you see your daughter at all during the period of time from after Mrs. Coates collapsed to when the EMTs arrived?

Milo Moss: Well, I was really trying to monitor Diane's pulse, which remained pretty much the same the whole time until the EMTs took over. I did look up and see Sandra, and she really looked concerned. I think her comments about Mrs. Coates being a, um, bitch, were because she thought Diane was just trying to get attention.

Detective Armstrong: When did Sandra say that?

Milo Moss: When Diane first fell down, Sandra thought she was faking it to make it look like Sandra was the evil one because she'd been so cruel to Diane that she'd fainted. But once Sandra realized it was actually serious, she honestly looked concerned. I know she didn't really care for Diane, but I don't think she'd wish any real harm on her. Not my daughter. In fact, last night after the ambulance left, she told me she felt really guilty about that outburst, and now she thinks she looks like a fool.

Detective Armstrong: Is there anything else that you can tell us about last evening?

Milo Moss: No, not that I can think of.

Detective Murphy: Thank you for your time. We'll be in touch if we have any more questions.