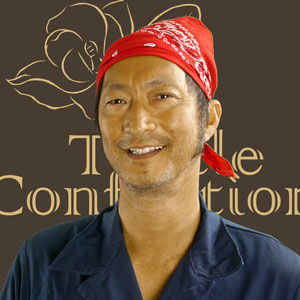 Detectives Armstrong and Murphy interviewed him at his place of business, Tuttle Confections, at 927 Whirlpool Drive. The interview was recorded with the witness's knowledge and consent.

Detective Murphy: For the record, could you please state your name and address?

Sam Tuttle: My name is Sam Tuttle. I live at 902 Cleveland Avenue.

Detective Murphy: You sponsored Barbara Dubois through most of her pageants. Why not this one?

Detective Murphy: That must have hurt, seeing as how you'd brought Barbara along from almost the very beginning.

Sam Tuttle: It was a painful break because I'd become part of the family — Barbara's Uncle Sam.

Detective Armstrong: How much business do you figure you lost when the Dubois family fired you?

Sam Tuttle: It's always difficult to determine the effectiveness of advertising. Maybe my involvement in the pageants sold a ton of chocolates, or maybe it only cost me money. In the end, I was in it for something else.

Detective Murphy: And what was that?

Sam Tuttle: Barbara. I can't believe she's gone. She was a great kid. By sponsoring her, I got to watch her grow up. I got to be there. She was always so proud whenever she mastered a new skill. Couldn't wait to show me.

Detective Armstrong: And then you were cut off.

Sam Tuttle: That's Susan for you. What, did Platinum Chocolates offer to throw in an extra ten a week? Offer to license Barbara's likeness to produce chocolate beauty pills? Except for Marty, her coach, I was probably Barbara's best friend in the world, but that wouldn't matter to Susan.

Detective Murphy: You were at the pageant the night of the murder?

Sam Tuttle: Susan could restrict access, but she couldn't stop me from attending public events.

Sam Tuttle: Susan didn't want me around Barbara. She thought it would send a mixed message, complicate the arrangement with Platinum. This past Christmas was the first in 17 years that I didn't spend at their home.

Detective Armstrong: Are you sure it was Susan who fired you? Maybe Barbara was behind the decision. Maybe she thought it was time to go in a new direction.

Sam Tuttle: Barbara wasn't like that. She never took the pageants seriously, never took herself seriously. Barbara got to dress up, perform a little, play the star, but she never thought she was a star. She was just having fun.

Detective Murphy: Even though there was a new sponsor, you provided chocolates to the finalists. Susan must not have liked that.

Sam Tuttle: She made it possible. I never would have presented Tuttle Confections to the contestants while I was sponsoring Barbara. That wouldn't have been right. This time there wasn't any conflict of interest. I talked to Allie Lamar about the possibility, and she loved the idea.

Detective Armstrong: Instead of sponsoring a contestant, you sponsored the pageant.

Sam Tuttle: In a small way.

Detective Murphy: And that sponsorship gave you access again.

Sam Tuttle: I got to wear a plastic nametag to dinner which identified me as a pageant sponsor.

Detective Armstrong: What time did you leave the convention center that night?

Sam Tuttle: Very late. It's hard to explain the buzz. Barbara was a finalist, not that I was surprised, and I couldn't have been more proud if she was my own daughter. I may have been on the outside, but even walking the empty halls by myself kept that feeling of excitement alive.

Detective Murphy: When was the last time you saw Barbara?

Detective Armstrong: Did you see anybody while you were out walking the halls?

Sam Tuttle: I probably passed everybody. There's nothing like the last night of a pageant. Tomorrow, people will be heading home, focused on how to improve for next time, but on Friday the bubble hadn't burst yet. Everybody is nuts.

Detective Murphy: Did anyone seem more nuts than usual?

Sam Tuttle: These are pageant people. You ever see that comedy where the mothers of the contestants tried to sabotage each other? It could have been a documentary. The kids, for the most part, they're normal. It's the people around them that are warped.

Detective Murphy: You'd be describing yourself as well?

Sam Tuttle: I paid for the privilege of raising someone's daughter. Does that sound normal? Allie was the one I felt sorry for. This was all new to her, and she looked as though she'd been attacked by those alleged lab rats of hers. I watch too many movies.

Detective Armstrong: What else did you see that night?

Sam Tuttle: I saw a bubble getting ready to burst.

Detective Murphy: Thanks for your time, Mr. Tuttle. We'll be in touch.