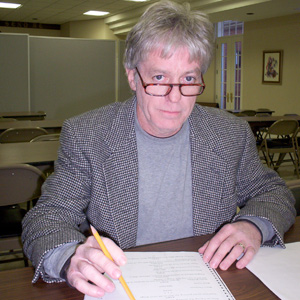 Walbert Dopelson was born on September 8, 1966, to Drs. Alan and Elizabeth Dopelson, faculty members at the University of Mississippi.

The two doctors met at an inter-departmental cocktail party when they were teamed together — he representing the History Department and she Philosophy — for a game of charades. According to faculty lounge gossip, the title on the slip of paper to be acted out was "Ode on a Grecian Urn" and Dr. Elizabeth Dopelson still colors at any mention of Keats.

After their successful pairing for charades, they began to date. One thing led to another and two months later, Alan and Elizabeth were married. Seven months later, Walbert was born.

The professors were loving parents who spent their plentiful free time doting on Walbert. His was a privileged childhood that included trips to hear the symphony orchestras in Memphis, TN; Birmingham, AL; and Atlanta, GA, birthday parties at museums in Jackson and Memphis, and summers in Italy.

In addition to doing extremely well at school, Walbert was a popular boy who year after year brought his track team to the state finals.

After receiving his master's degree in Library Science, Walbert accepted a job as Circulation Manager at the University of Mississippi library. Five years later, he became the Director of the Yoknapatawpha County Library, a position which he still holds.

Walbert has also been the Director of the Yoknapatawpha County Literature Festival for the last eight years and is credited with keeping the festival operating in the black during financially uncertain times. He added activities for children to make the festival more family-friendly and partnered with local companies to generate advertising dollars.

When not running the library or organizing the annual festival, Walbert sculpts marble busts of local celebrities, donating the profits from all sales to the library and other non-profit organizations serving the Oxford area. The C'est Belle Gallery even hosted a show of Walbert's sculpture one summer, using the collection to narrate a contemporary history of the region.

A story about Walbert appeared in the Sunday magazine section of the Oxford Eagle on March 7, 1999. In the article, he discussed the tools he used in his work: rock hammers, small picks, and chisels of various diameters. He also explained how he chose such an unusual hobby. "When one is cooped up all day dealing with administrative tasks, it helps to be able to crack open a skull or two at quitting time, at least figuratively."

Walbert's staff at the library describes him as calm and even-tempered. His secretary, Paige Johnson, shared one of his tricks. "He always carries a small rock hammer in the front right pocket of his pants. I asked him about it, and he told me that when a meeting is going bad or budget cuts are announced, he'll reach into his pocket and touch the hammer, put his mind elsewhere for a second in order to calm himself."

According to several sources, the agreement between Lamar Cosmetics and the Yoknapatawpha County Literature Festival included a sculpture by Walbert of the pageant winner, the name of the sponsor appearing prominently on the brass base. The resulting bust would stay in Oxford for six months before being sent on tour to high schools across the country.

Walbert's personal life is no open book. He is rumored to have dated Lucille Ruffin-Moore for a short period after the death of her husband, but no other romantic links have ever been established. One ex-employee labeled him cold and calculating. "He puts on this high and mighty act, him and his fancy degree, but he's just an animal like the rest of them. Worse even, 'cause he pretends not to be."

The only other possible stain on his impeccable background is the ten months ending August 2002. One day, he left a message on his secretary's answering machine saying he would be out for a while but not to worry, to sign whatever was necessary to keep things functioning smoothly until he returned.

When he finally did reappear ten months later, he would say nothing about where he'd been or what he'd done except, "Blame it on Nabokov." The details of how he spent the time have never been revealed.

Walbert is regarded by most as a community leader and asset. Several people remarked that it was a shame he was the artist responsible for immortalizing the pride of Oxford because he was too humble to count himself among that number. As one person commented, "Walbert's head would raise a fair amount at auction."

As a condition of her contributions to the Literature Festival, Allie Lamar instructed Walbert to hire a private investigator to keep tabs on Wendy Kullman. The retainer fee for Thompson Investigations, Inc. was not paid out of accountable festival monies, but instead came directly from Allie Lamar's private funds.