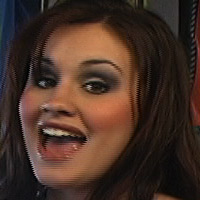 Barbara Ellen Dubois was born to Gerard and Susan Dubois in Oxford, Mississippi on August 3, 1991. Gerard Dubois and Susan Whitleff had met through mutual friends, and Gerard often called it "love at first sight." They were almost constant companions for the six months before their wedding.

After a year and a half of marriage, they were blessed by the birth of a precious baby girl, Barbara. She was so beautiful that people often stopped the proud parents on the street to comment on the gorgeous child who would surely one day be a beauty queen. But beauty wasn't her only asset; she was a happy, strong little girl with an independent but loving spirit.

Gerard and Susan loved their role as parents and looked forward to adding to their family, but Gerard's life ended in an automobile accident a month before Barbara's second birthday. Susan was devastated by her husband's death, but the realization that her daughter's upbringing was now her sole responsibility kept her grounded and able to cope. Barbara became her mother's anchor as Susan concentrated on her child.

Fortunately, Gerard had made excellent financial arrangements for Susan so that she was able to remain a stay-at-home mom with a comfortable income. Although Barbara was the center of her universe, Susan was very careful neither to indulge the child's every whim nor to spoil her.

When Barbara was old enough to benefit from association with other children, Susan placed her in a progressive day care center. At first, Barbara attended for a few hours a couple of times a week and later several hours each day.

Although Susan could well afford a private school, she felt her daughter would benefit from meeting children of diverse backgrounds, so enrolled Barbara in public school.

Barbara was popular with children and teachers. She was friendly and cheerful with her classmates and proved to be a conciliator on the playground, helping to defuse many playground confrontations. She also set an example in the classroom with good listening and participation skills, did her homework, and maintained excellent grades.

But Barbara was far from perfect. She had a stubborn, reckless — even rebellious — streak. From the time she was barely able to walk, she was climbing on everything.

Once she somehow managed to climb onto the low roof of the storage shed in her backyard. She was ready to spread her wings and fly when Susan pulled her to safety just in time to avoid a disastrous landing.

Although she knew the shed's roof was off-limits, Barbara went back time and again until the area was finally fenced off and unavailable to her. But that didn't stop her. She just looked for other forbidden things to try.

She seldom cried and was never heard to whine or whimper, even when really hurt. Her mother called her "my tough little cookie."

When Barbara was five years old, a friend of Susan's suggested she enter Barbara in a Baby Beauty Pageant. Susan at first scoffed at the idea, but decided Barbara's beauty, poise, and talent shouldn't be a secret. She entered her in their first pageant.

Surprisingly, Barbara was a runner-up on her very first try, and Susan was hooked. She began Barbara in dance lessons and soon added piano and singing lessons.

Barbara good-naturedly indulged her mother and seemed to enjoy the competition and excitement of the pageants, but as she became older resented the countless hours necessary to perpetuate her pageant life.

She loved jazz, ballet and tap lessons, but when she was 10, she adamantly refused to go to any more piano and singing lessons. She valued the time she had with her friends, so she convinced her mother that concentrating on dance classes would pay off in the long run.

She became an accomplished dancer acclaimed by her ballet teacher as the local ballet company's "future prima ballerina," and by the studio's jazz and tap teachers as their "star of the future."

She also spent endless hours with her coach, Marty "Slim" Rutgers. All serious pageant participants had coaches who were experts in the secrets to winning pageants.

Slim coached Barbara on how to walk and talk on stage and what clothes and costumes to choose. He hired makeup and hair specialists and decided which talent routine would harvest the most judging points. Slim was one of the best, most expensive coaches on the pageant circuit, and Susan felt lucky to have him.

Then when Barbara was 14, she suddenly announced to her mother that she didn't want Slim around anymore. She convinced Susan he had taught her everything she needed and she was tired of spending so much time with him.

Susan was puzzled by this abrupt change of heart but attributed it to Barbara being a teen and asserting her independence. She was also aware of Barbara's new interest in young Bill Lamar, and so figured they probably wanted more time to spend together.

Bill Lamar was the son of Allie Lamar of Lamar Cosmetics, which was a frequent, valued pageant sponsor. Bill was a few years older than Barbara and seemed a steadying influence on the younger teen.

The youngsters, finding they had much in common, became inseparable. Susan liked the young man and was glad Barbara enjoyed spending time with someone connected with the pageants.

Then in March 2007, just before the Miss Junior Mississippi pageant, Susan suddenly withdrew Barbara from the pageant and they moved to Atlanta.

Barbara's friends were devastated when she left, but glad for their friend when they learned she was going to a special school for a year to perfect her pageant talents. They were disappointed that Barbara did not communicate with them during that year, but attributed it to her being too busy with her new schooling.

Soon after Barbara's departure from Oxford, Bill went to Europe to complete his schooling and remained there ever since, meeting his mother in Europe for visits rather than returning to Oxford.

When Barbara returned to Oxford from Atlanta, her closest friend, Rachel Webb, noticed a new seriousness and maturity. Barbara talked little of her year away, and once again became engrossed in the pageant life.

Barbara had always been willing to share her pageant know-how with younger girls and spent even more time mentoring them now that Bill wasn't around. Always considerate and caring, she was well-liked, even by most of her competitors.

Barbara intended to make the Yoknapatawpha County Literature Festival Pageant her last so she could go on to fulfill her dream of educating children. But her dreams and her life were cut tragically short when she was brutally murdered.