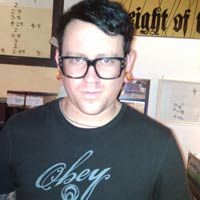 Robert "Bobby" Wannamaker was born in Holly Springs, Mississippi, in 1962. He spent his childhood in the northeast hill country of the state. His father, Clyde "Junior" Wannamaker, played the fiddle and guitar and taught his son an appreciation for the folk music of the Mississippi hills. Wannamaker has five sisters, so the bond with his father was crucial.

At the age of 17, Wannamaker yearned for the city, and he left his family's farm to pursue a career in music. Though he wasn't particularly adroit as a musician, he became noted for his musical ear. He made friends in Memphis, and they steered him toward Nashville, where country music was prominent.

By 1990, Wannamaker had befriended such musical luminaries as Johnny Cash, Reba McEntire, Randy Travis, and George Strait. He trained his musical ear in the studio, working on projects with some of these artists and various other up-and-coming musicians.

In 1993, Wannamaker began traveling throughout the South in search of undiscovered talent.

His greatest discovery was a young blues prodigy named Marvin "Muscle" Shoals, who was gunned down at the age of 23 in his hometown of Cleveland, Mississippi, on the eve of his first major recording session. Shoals was already being touted as the next Howlin' Wolf.

After an extended and heated court battle with the singer/guitarist's remaining family members, Wannamaker won exclusive rights two years ago to Shoals' demos, and he plans to release a collection in the near future.

Though he has yet to produce the smash album he always dreamed of, Wannamaker has proven himself a shrewd businessman, earning his living by investing in the television and music industry. He recently completed a three-month rehabilitation for alcoholism in a Nashville hospital, and he is currently producing an album of up-and-coming country musicians.

Wannamaker and his girlfriend, Wendy Toddings, divide their time between Nashville and Oxford. Wannamaker's lake house on Coles Point Road near Sardis, MS, is about 20 miles outside of Oxford. He rented his Coles Point home to Forrest Burgess March 15-31, 2014.