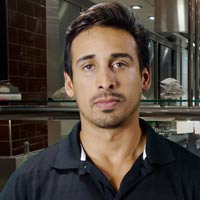 Born July 3, 1988, Forrest Burgess has lived in the Oxford, Mississippi, area all of his life. His father, Jerome, is a systems analyst for Data Tech Computers in town, and his mother, Anita, works in the Registrar's Office at the University of Mississippi. He has two younger siblings: Martine, 10, and Zach, 13.

Forrest was a straight-laced student throughout his time in the Oxford school system. He graduated in 2006 and went on to study liberal arts at the University of Mississippi, hoping to become a magazine editor. His education lasted less than a year, however. He dropped out of college in 2007, shortly after his high school girlfriend and fiancée, Laurie Daniels, left town.

Since leaving school, Forrest has frequently been seen around local bars or out in the county at late-night parties. He has been employed at various establishments, among them City Grocery, Proud Larry's, Square Pizza, The Library, and The Blind Pig. He has worked as a doorman, a dishwasher, a delivery person, and a waiter.

He is currently out of work and living with Paul Mercury. Before moving in with Mercury, Burgess lived with Callie Shivers in Yocona, Mississippi. Mutual acquaintances say she asked him to leave when he ran out of money and she ran out of patience.

In the interim between living with Shivers and Mercury, Burgess rented a lake house from Nashville record producer Bobby Wannamaker, who apparently reconsidered the arrangement after less than two weeks.