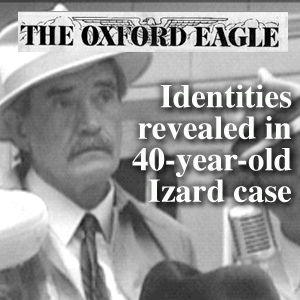 It was hard to distinguish between tears and sweat Saturday morning at the Bishop Hill Cemetery. A woman dressed simply, wearing a black dress and a veil, bent down on her knees and kissed the new grave marker, then placed a ring beside the freshly covered grave. After a moment of peace, she got in her car, her packed bags in the backseat, and drove away.

Forty years ago, this section of the graveyard became the permanent resting places for Richard and Lisa Izard, both killed in their garden by a drunken madman with a shovel in 1958. Now joining them are their two children, LeAnne and Ricky, whose bodies were both found in a pond on Old Taylor Road on June 6.

The woman driving away in the car was Doris Hammack, a Detroit seamstress who provoked renewed interest in this murder case when she appeared in town in May with a suspicion that she might be the missing LeAnne Izard. Since that time, Hammack has been staying in Oxford, learning more about herself than she bargained for.

Friday morning, the Yoknapatawpha County Sheriff's Department announced that the Izard case had been solved. The long-pursued murderer, said Detective Terrence Nelson, had been identified as Howard Hadley, a worker at the Bowlan Glove Factory, where Izard was a foreman, the same man who laid off 153 workers on the day of his murder.

It has also been discovered that Hadley was the father of Doris Hammack, who was born July 18, 1955 in Oxford, then taken away to Detroit where she was given up to the Immaculata Catholic Children's home in 1960.

All of this new information in the Izard murder case has come out since Hammack's arrival in town nearly a month ago.

"I didn't come here to be a hero and save the day," said a clearly exhausted Hammack, while she prepared for her return trip to Detroit. "I wanted to find out about my history. And I did. I got them, all answers to the questions I've been researching my whole life."

By now the story is familiar: Hammack arrives in Oxford claiming to be the long‑lost LeAnne Izard. She bears a resemblance to baby photos of the only Izard daughter and was in possession of a ring that matched the one taken from Lisa Izard after the murders.

Saturday, Hammack returned that ring to its rightful heirs: the Izard children, buried together in a plot beside their parents.

"Of course, this is heartbreaking, like discovering you're some kind of sicko or something," she confessed, weeping after the news that her father, Hadley, had been identified as the murderer. "I didn't really know my father, and I think that was very fortunate for me."

After several weeks scraping by in Oxford with few new leads, Hammack volunteered to undergo forensic hypnosis analysis, which proved to be a phenomenal success. She was able to reconnect with her past and uncover images of blood and water that pointed detectives to the pond on property once owned by Hadley. It was a neighbor in the Detroit housing project where Doris was raised who confirmed the grisly dreams from a Michigan veterans home.

"What has been most interesting about this case is the number of people who have come together to offer support or their own theories by studying the clues collected from 1958," Detective Nelson said. "And with Ms. Hammack coming forward, it just seems like this case wasn't ready to be solved until now. It's like justice has been asleep for this family for 40 years."

But now that the murderer has been found out, what next? Howard Hadley, who was known in Detroit as Howard Hammack, died in 1960 from a heart attack, though his success in evading the law for so long has lead many to believe Hadley is still alive.

"I can assure you that Hadley is deceased," Nelson said. "The man in Detroit who came forward will testify to that."

The closing of the Izard murder case brings relief not only to Doris Hammack, but to members of the Oxford and Yoknapatawpha community who have lived under the shadow of suspicion for 40 years.

"Well, it's just a great big relief," said Elbert Warren, Sr., a retired Oxford man who once rented the property where the kids' bodies were found and was even a suspect in the murder in 1958. "That murder was so baffling that every man in the county was a suspect at one point. It's a breath of relief to have that mess sorted out finally."

By compiling their vast amount of evidence, investigators believe that on the day of the murders, April 11, 1958, Hadley had been in a rage over his dismissal from the plant. He had become intoxicated to the point of violence when he arrived at the county home of Richard and Lisa Izard. He then beat them with the shovel they were using, and later gathered the children from the house and took them to his farm on Hopewell Road, now County Road 323.

The act was probably committed in the heat of argument, and the horrible murders of the children an act of witness disposal.

"Everything we have says that these murders were committed out of anger, frustration and chemical frenzy," Nelson said. "We don't believe this was a bigger conspiracy as many have suggested. It was just an extreme response to the economic hardships of the time."

And so, 40 years later, Oxford marks a moment of silence for good country people lost to rage and violence. The memories that have failed to stay erased have affected a new generation.

"I have to leave here to sort this all out," said a teary Hammack on the eve of her departure. "It's not easy coming to terms with this.