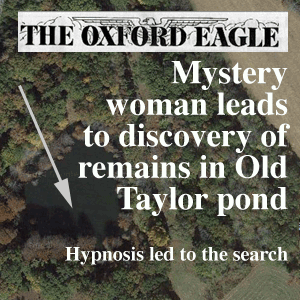 Hypnosis led to the search effort

The Yoknapatawpha County Sheriff's Department found two sets of human bones in a drained pond on Old Taylor Road yesterday. Investigators have reason to believe the bones are the remains of LeAnne and Ricky Izard, two local children who have been missing for 40 years.

This discovery is the biggest lead in solving the recently reopened murder case of Richard and Lisa Izard, an Oxford couple found murdered at their home on April 11, 1958.

Sheriff's deputies received a tip that two children's bodies may be at the bottom of a pond at the former home of Beatrice Carmichael, who died May 31 of heart failure. The tip came from Doris Hammack, a Detroit native who arrived in Oxford under the impression that she may be the missing LeAnne Izard.

"Ms. Hammack convinced us she had found clues that strongly suggested there were bodies in this pond," Detective Terrence Nelson said. "Lo and behold, she was right. But at this time, we don't have a positive identification of either set of remains. We don't know for sure that these are the Izard kids."

Two sets of bones, both determined to be those of children, are under examination by the county coroner. A report is expected by week's end.

Recent developments have resurrected interest in the 40‑year‑old Izard murder case, which involved the brutal bludgeoning deaths of Richard Izard, foreman of the Bowlan Glove Factory, and his wife, Lisa. The murders occurred on the same day as a mass layoff at the factory, which has led investigators to believe that the murders were an act of retribution by a violent and disgruntled factory worker.

The 1958 case was reopened in May when Hammack brought forth clues — namely, two unsigned letters and a missing heirloom — that suggested she was the long‑missing LeAnne Izard.

An orphan who spent much of her youth in various foster homes, Hammack began to search for answers to her identity years ago, and the trail of clues eventually led her to Oxford.

Hammack recently released a statement to the press attesting to her new belief that she was the daughter of Howard Hadley, one-time Oxonian and a suspect in the Izard murder case. Hadley died in Detroit on August 20, 1960.

"New information has come to light following a recent hypnosis session I underwent," reads Hammack's statement. "Some mysteries of my childhood have become resolved in my memory, and these things don't affect just me, but the Izard case and all of Yoknapatawpha County for that matter."

Sheriff's investigators would not comment specifically on what the latest findings mean to the Izard case but did say their investigation is ongoing.

"The pieces are falling into place now," Detective Nelson said. "I think this is a mystery that time has helped solve. Time is almost up."