A young woman was found dead in a convenience store restroom.

Who wanted this teenager dead and why?

A convenience store clerk and a customer found the bloody body of 17-year-old Katie Masters in the store's restroom.

Who wanted to kill this teen and why?

Examine the evidence and solve the case.

Ready to get started? Check out the Roller Deadly Case Introduction and Case Recap. Then review the Latest Case Information.

The Roller Deadly case documents are presented in reverse chronological order in the Case Files.

The Roller Deadly investigation began on Monday, January 18, 2021, and will run for about two weeks. 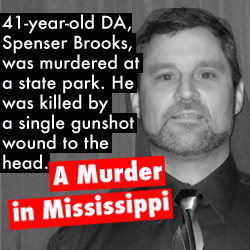 The body of the 41-year-old DA was found by a citizen staying at the park and that the victim apparently was killed by a single gunshot wound to the head.

The victim, District Attorney Brooks took over the DA's seat by popular vote in 2007. Brooks was known as a hardnosed DA with a high conviction rate.

Evidence from this case is released twice weekly.

The case is organized into categories of Interviews, Evidence, Biographies, and Press. Links to each category are provided on each case page (top right). Click on these links to move between categories and view the different items of evidence.